Ghosts loom large over screen adaptations, large and small. Each successive Bond, for example, must go to work each day knowing that the world is comparing him to Sean Connery. Should anyone ever remake To Kill a Mockingbird, the new Atticus Finch must contend with the fact that he will inevitably be seen as an interloper, a pretender to the crown once worn by a beloved actor in an iconic role.

Screen adaptations have the power they do in part because we can visit and revisit them. We can rewatch Star Wars a hundred times; that, however, means that it is virtually impossible for us to imagine anyone besides Harrison Ford as Han Solo. 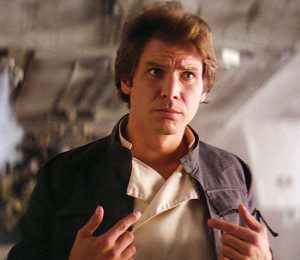 Don’t everyone thank me at once.

Such was the wall I ran up against when I went to see Richmond Theatre’s new play, Jeeves & Wooster: Perfect Nonsense. The Jeeves and Wooster I know and love is the version brought to life by Stephen Fry and Hugh Laurie; their takes on the characters are, simply put, my takes on the character. When I read Wodehouse, I imagine dialogue being delivered as Laurie delivers it, or Jeeves saying ‘very good, sir’ in Fry’s voice (and with Stephen Fry’s inimitable demeanor). It’s not that I’ve seen the tv show so many times I’ve got it memorized; it’s just that the actors are so pitch-perfect that I can’t imagine any other Jeeves and Wooster. 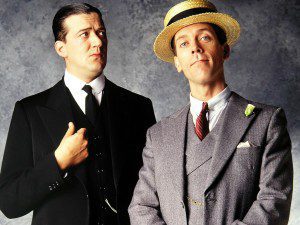 Bertie Wooster: Am I wrong in thinking that all little girls are hard-bitten thugs of the worst description?
Jeeves: Your definition is sadly near the truth, sir.

So – as far as I was concerned, at least  – Matthew Macfadyen and Stephen Mangan had a lot to contend with as Jeeves and Wooster. And, for the most part, they achieved it. There’s ridiculousness, wordplay, physical comedy, and even a little meta commentary on the artifice of live theatre. Perfect Nonsense is a three-man show with Mangan as affable twit Bertie Wooster, and Macfadyen and a third, Mark Hadfield, playing multiple parts. Hadfield, playing everyone from wheezy old butler Seppins to firecracker Aunt Agatha (or was it Dahlia?) to Oswald Mosley stand-in Roderick Spode, walked away with the show. But Mangan’s Wooster is sweet and dumb and enthusiastic, and Macfadyen’s Jeeves is calm and controlled and centred (making the actor’s turns playing a temperamental uncle, a drippy fiancée and a myopic newt-fancier that much funnier in contrast.) 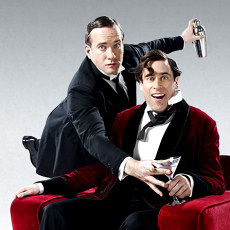 All that said, the show felt a little flat to me; it lacked the sparkle of the Fry/Laurie adaptation, but also the speed and flair of a good screwball comedy, which it seemed to be aiming for. But the audience seemed happy, and it was good fun, if not the most brilliant night of theatre ever.

So, if Jeeves and Wooster are your thing, you could do worse than to get tickets to this lively performance. But, you could also dust off your Fry & Laurie DVDs and give them a whirl. Or reread the books. 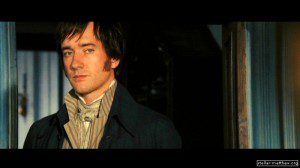 And here’s a Darcy thousand-yard glare, if you’re into that sort of thing.