If you haven’t played Cards Against Humanity yet, why not?

It’s a modern-day success story: a Kickstarter-funded card game that became a huge success and has spawned, to date, four major expansions and seven (or more) minor expansions. Though it started life in the US, there’s definitely a UK edition, too. (So, if you don’t know who Donald Rumsfeld is… don’t worry.)

What’s Cards Against Humanity? It’s a black box, full of cards – 460 white, 90 black. The white cards are answer cards, containing a single word or phrase, or a construction (eg BEES?, Dick Cheney in a clown suit, and 458 much more offensive options). The black cards are question cards, everything from ‘What’s that smell?’ to ‘[blank]. It’s what’s for dinner!’ The mechanic is simple – each player gets 10 white cards, and then one person draws a black card and reads it aloud. The non-askers then shuffle their cards and find the best, funniest, or most offensive answer, and pass it in, face down. The asker reads th 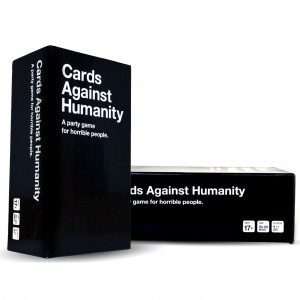 em all aloud. (‘What’s that smell? Dick Cheney in a clown suit!’), and chooses his or her favourite answer – whether it’s because the card combo is funniest, meanest, or most appropriate (or whatever). The black question card is then passed to the player whose white card was chosen; it’s an Awesome Point. Whoever amasses the most Awesome Points by the time the cards run out wins.

In short, Cards Against Humanity is my perfect game. The mechanic is dead simple, and winning relies on playing the other players, and being mean.

I come from a long line of card players. Regular cards, mind you, though I think my family would go for Cards Against Humanity in a big way. Regular card games are as much about playing each other and being mean as the rules of whatever it is we’re playing. (Usually euchre.) Cards Against Humanity simply does away with most of the rules, stripping card-playing down to its essence.

And oh, what an essence it is. I’d share some of my winning combinations here, but they’d make you think less of me.