Posted on January 20, 2014 in Fun Stuff with tags Television Review, Weekend Round Up

This weekend I watched the first episode of True Detective, a new series about a couple of cops investigating an occult (or, more specifically, Illuminati?) murder in a down-and-out town in Louisiana. 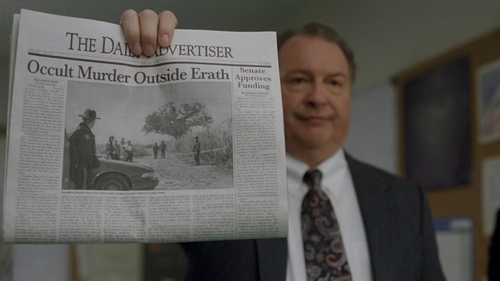 So far, so unexceptional. The mix of spectacular violence and American Gothic the premise promises is the the bread and butter of TV networks. But, True Detective is a bit subtler and more haunting than its counterparts and here are a few reasons to watch it:

Cohle (Matthew McConaughey) spends most of the first episode obsessively recording details about the crime scene and frustrating his colleagues with his inappropriate nihilistic outbursts. This places him alongside crime show darlings such as Will Graham and Carrie Mathison, tragically gifted and tragically afflicted in equal measure, except McConaughey’s Cole is just a bit more abrasive than his television peers and his genius isn’t allowed to be the driving force of the show.

Cohle has a strong counterpart in Hart (played by the inimitable Woody Harrelson), who doesn’t let Cohle or the audience sit pretty with Cohle’s workplace weirdness. Here are a couple of their exchanges from the first episode:

Cohle: “I’m a pessimist”
Hart: ”What’s that mean?”
Cohle: ”It means I’m bad at parties.”
Hart: ”You ain’t good outside of parties either.”

Cohle: “This place is like somebody’s memory of a town, and the memory is fading. It’s like there was never anything here but jungle.”
Hart: “Stop saying shit  like that. It’s unprofessional.”

The series cinematographer Adam Arkapaw has worked on two of my favourite sinister slow-burners Animal Kingdom and Snowtown, and True Detective is full of haunting shots of the bleak Louisiana landscape.

Caveat: I’m only one week in, but so far it doesn’t seem to be taking a mutilation of the week approach à la Hannibal (not that I didn’t enjoy the totem pole of dismembered parts, but everything in moderation…).

There’s a framing series of interviews with Cohle and Hart in the near-present day which, by the end of the first episode, are already throwing up some interesting doubts about their characters and signal that there’s some complex storytelling afoot.

A bit of Bob, a bit of Gospel, a bit of classic rock. A perfect hot and humid accompaniment to the show. I’ve been tapping my foot along to this one since the closing credits of episode one:

Opening credits aren’t always a great indication (I’m looking at you True Blood) but these ones capture the hypnotic grittiness of the series, whilst also being a spectacular thing unto themselves. There’s a very interesting behind the scenes piece from the creators over here.

And, if this hasn’t persuaded you, just watch the trailer!