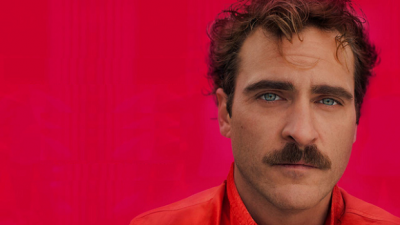 Posted on February 17, 2014 in Film with tags Film, Her, Science Fiction, Weekend Roundup

‘Are these feelings real, or is it just programming?’

On Friday night I thought I’d avoid Valentine’s Day schmaltz by going to see a sci-fi film. It ended up being one of the most relatable, moving love stories I’ve seen in years.

Spike Jonze’s Her tells the story of Theodore, a man in mourning following the end of his marriage, who rediscovers his lust for life when he falls in love with his artificially intelligent operating system, Samantha.

It may seem like a ridiculous premise – basically, falling in love with a more advanced version of Siri – but it is so beautifully told and subtly acted that in fact you are completely carried along, and in many ways can associate with Theodore’s motivations. Samantha is always there for him; she gets him completely; she doesn’t overwhelm him with her own emotional baggage, which was a key factor in the breakdown of his marriage. Not to mention, of course, that Samantha has the sultry, husky voice of Scarlett Johansson, which is surely tough to resist.

Joaquin Phoenix, in the lead role of Theodore, is heartbreaking. His journey from quiet despair to hope is beautifully understated and utterly convincing. Johansson is completely brilliant as Samantha – I’m not surprised she’s received Best Supporting Actress nominations despite never once appearing on screen – and Amy Adams also gives a wonderfully moving performance as Theodore’s friend and confidante Amy. Special mention must be given too to the hilarious child actress who plays Theodore’s god-daughter, who gives the kids in Outnumbered a run for their money.

Which brings me to the fact that Her, as well as being – I think – a little bit of a masterpiece emotionally, is also very funny. A lot of the humour is down to the sci-fi element of the film, which I found all the more engaging because it was so close to reality: we all laughed at one of the early scenes during which the passengers in a subway carriage were all engaged in conversation with their electrical devices – looking round during my bus journey to work this morning, things weren’t all that different!