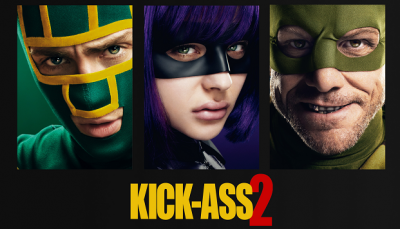 Posted on August 26, 2013 in Fun Stuff with tags Kick-Ass, Weekend Round Up

I loved the original Kick-Ass film and had been waiting and waiting for the second one – so you can imagine my disappointment when, the week before release, I looked at my movie app and saw that it had a 29% Rotten Tomatoes rating. 29%?! Yikes… Although I still couldn’t resist going to see it, I went in with very low expectations, thinking this might be a ‘two hours of my life I’m never getting back’ situation.

So in fact what I got was an extremely pleasant surprise. Sure, it lacks the shock factor of the first film, there are fewer laugh/groan out loud moments, and *Kick-Ass 1 spoiler alert*no-one gets cooked in a microwave (that has to go down as one as the most genius, gruesome death scenes ever!). But it is still smart, sharp, funny and enjoyable, and it is still seriously kick-ass. I missed Nicolas Cage’s ‘Big Daddy’, but Kick-Ass’s new gang of superhero pals provided great comedy value, and Christopher Mintz-Plasse is hilarious as super-villain ‘The Mother F**ker’.  And of course Aaron Taylor-Johnson (Dave/‘Kick-Ass’) and particularly Chloe Moretz (Mindy/‘Hit Girl’) gave strong performances once again.

So is Kick-Ass 2 the greatest movie out this year? No. Is it as brilliant as the first one? No. But is it worth a watch? Definitely. And with the ending clearly setting up for a third film, I am sure that the Kick-Ass franchise will stay firmly in the superhero movie cannon for a long time to come – and deservedly so.

(Speaking of superheroes, watch this space as next week Hodderscape is going superhero crazy in honour of Lavie Tidhar’s The Violent Century…)