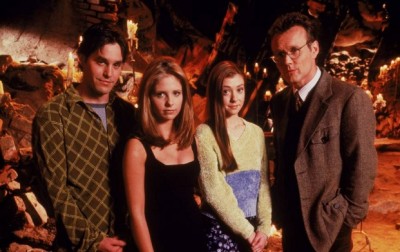 This weekend, the wonderful channel SyFy has reintroduced Buffy the Vampire Slayer into my life. Now I’m sure most of you will know exactly what Buffy is, but for those that are maybe too young to have gotten in on the cult classic or for those who have simply haven’t heard of it I will break it down for you.

Buffy Summers is a teenage girl who is a Slayer, she fights vampires (predominantly) but she also saves the world on a semi-regular basis from fearsome creatures, Gods and even her friends. As the series progresses it simply becomes better and better, the franchise is an amazing creation of the incredible Joss Whedon. Who in case you’ve been living under a rock, was the director of the hugely famous Avengers Assemble, creator of Angel (a spin-off from Buffy), creator of Firefly (another HUGE cult classic – and one of my personal favourites) and the less well-known Dollhouse. Oh and just to change things up a little bit, he also co-wrote the screenplay for the massively successful… Toy Story. So yes, Joss Whedon is evidently a man of many talents and yes you should 100% watch anything that he has created or directed – starting with Buffy!

Buffy is an incredible creation simply because it was revolutionary, it was the inversion of the horror cliché; instead of the pretty blonde girl being chased by the monster you have the pretty blonde girl chasing down the monsters. Buffy challenged viewers in so many ways, the male characters though obviously heroic in their own way were always second to the female – constantly behind and secondary to the strength and charisma of the leading ladies. The storylines upheld this as well, ranging from metaphors for global empowerment of women to the personal aches of a girl growing into a woman.

I’ve consistently watched this show since I was a young’un, I turn to my favourite episodes when I feel happy, sad or just need to be entertained. I would say that if you watch anything this week, maybe take a look at an episode of Buffy and let its witty banter lead you into the fantasy world we all love.

If you haven’t watched the show already I will give you some of my favourite episodes as a recommendation, and if you have – well enjoy them all over again! (FYI: SPOILER ALERT with the descriptions)

3 comments on “Weekend Round Up”