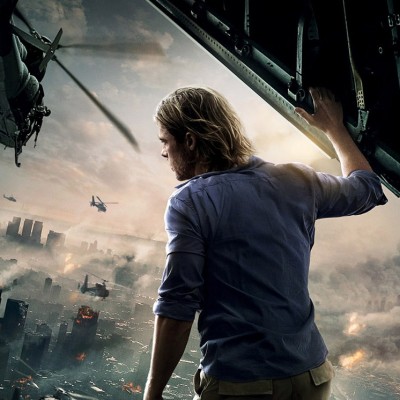 So it seems that my rabid enthusiasm for Man of Steel may have been premature and purely influenced by some brilliant trailer editing. So don’t worry – this weekend recommendation steers completely clear of a trailer which sees the ever-heroic Brad Pitt abandoning his family to save the world.

Today sees the release of World War Z, Brad Pitt’s zombie epic that we seem to have been waiting for, for a while.  Apparently it needed seven weeks of reshoots to get some semblance of plot, and the budget exploded from $125 million to $200 million. But don’t let that put you off, it’s not your money!

Based on the novel by Max Brooks, it sees husband, father and UN employee Gerry Lane careering across the world to stop the Zombie pandemic, find the source (Patient Zero) and save humanity. With a voyage that takes in New York, Jerusalem, South Korea, and, apparently, Wales this is an international film for an international audience. Zombies swarm everywhere – I’m going to have to use the trailer a bit, until they start inviting me to premieres – taking down planes, buildings, whole cities that lie in their way. These are vicious zombies, not the ambling, loveable zombies of Warm Bodies or Shaun of the Dead. And it seems that the ever faithful Brad (Brad sounds much more heroic than Gerry) may have worked out what makes them tick. Clever, Brad.

The always reliable, and academically sound, Rotten Tomatoes has given World War 73% versus Man of Steel’s decaying 56% (NB After Earth has got a putrid 11% – AVOID). Whilst Man of Steel had huge expectation to live up to and seems to have, on the most part, failed, World War Z can only swarm through the doubts that the sceptics hold. So this weekend you should go and watch Brad Pitt and his luscious locks save the world, and banish all the bad Man of Steel memories from your mind. You’ll want to see it because people get sucked out of plane, and, at the moment, it’s all about being sucked out of a plane. And if nothing else, the oldest Jolie-Pitt makes his acting debut, and Brad and Angelina’s Hollywood dynasty is begun.