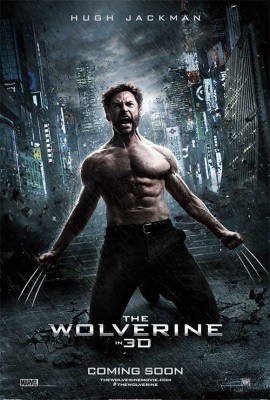 Hugh Jackman is back as Logan, aka Wolverine. This next instalment of the X-Men franchise makes Jackman the actor who has appeared as his superhero alter-ego the most: a whopping six times, beating Samuel L. Jackson as Nick Fury and Robert Downey Jr as Iron Man (each with five appearances).

There is the inevitable worry that the story will get tired. Six times in, can Hugh Jackman really still love playing Wolverine? And can he expect the fans to still be interested in Wolverine’s story? Well, Hugh and director James Mangold are certainly trying to keep us captivated. They’ve moved local: we’re now in Japan, with Logan meeting old acquaintances and making new enemies.  The rest of the cast are virtual unknowns: compared to the all-star cast of X-Men Origins, including Ryan Reynolds and Will.i.am (yes, Will.i.am; no, I don’t know why either) – this is stripped back, simple stuff. Or, in other words, the Hugh Jackman show. Let’s hope Wolverine doesn’t feel the need to sing.

Whilst we’re used to the moody, distant Wolverine, Jackman and Magnold have promised that this will show more of Wolverine’s soul. What it’s like to be hundreds of years old, having seen all the people you care about die. This is post Jean Grey, so post Logan killing the love of his life…grim stuff. And this is the clincher – Wolverine is given the chance to become mortal. We’re used to Wolverine healing, being invincible. This film intends to show us that he’s not, physically or emotionally. And there’s a kick-ass fight on top of a moving train. Whilst this may be an action movie favourite, we have the added dimension of this being a bullet train aka crazy fast. And I think it’s safe to say that Hugh Jackman still enjoys playing Wolverine.  Considering the huge amount of effort that he puts into bulking up for these films – he doesn’t eat carbs after 3pm, is required to eat 6000kCals a day, and he allows himself one ‘fun’ workout a week (I don’t want to think what an unfun workout involves) – he must do! So, therefore, dear fans, we should love it too.