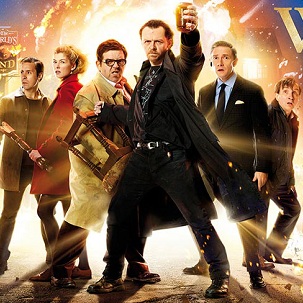 Posted on July 19, 2013 in Fun Stuff with tags Weekend Recommendation

Shaun Of The Dead is one of the best zombie movies of all time; a brilliant love letter to the genre which became a cult hit and spawned far too many catchphrases that’s fair for any one film.

Hot Fuzz was an American-style raucous buddy cop comedy which saw old ladies get drop kicked to the face and has now led to everyone having flashbacks to “Yarp” whenever they see the Hound in Game Of Thrones.

After two incredible films and a whole lot of pressure to live up to, Edgar Wright’s Cornetto trilogy comes to a close this weekend with the eagerly anticipated The World’s End.

Sticking with the theme of taking small-town England and throwing something entirely out of the ordinary at it, The World’s End sees five childhood friends reunite to attempt an epic pub crawl, 20 years after they failed it the first time.

However, plans start to go awry as aliens attack and the struggle to finish 20 pints becomes a struggle to save mankind.

Honestly, there’s not much more I need to say. If you loved Shaun Of The Dead and Hot Fuzz, or any British comedy produced in the past 15 years, you’ve probably already made plans to see The World’s End, haven’t you?