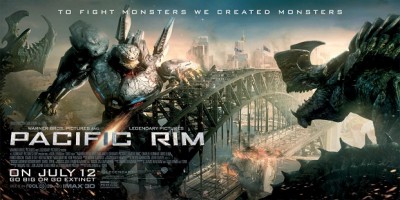 Let’s face it, there’s only one thing you should be doing this weekend… and that’s going to the cinema to see Pacific Rim!

2D, 3D, it really doesn’t matter: you need to see this film.

It is the 2020s and Earth is under attack from Kaiju, huge monsters which have crawled out of a portal on the ocean floor. Humanity is not helpless, however, as they unite to create Jaegers, which are humanoid mechs controlled by two pilots. Cue two hours of epic giant monster-on-robot fighting action.

To put it very simply, Pacific Rim is a Power Rangers movie for grown ups.

Not only that, but it’s directed by the fantastic Guillermo Del Toro and even stars Ron Perlman & GLaDOS from Portal (Yes, really). While at first glance it looks like it’s nothing more than a big, dumb action movie, this isn’t another Michael Bay’s Tranformers.

Sci-Fi Now described Pacific Rim as ‘…endearing, brainless and awesome as a puppy with jetpack, Pacific Rim is the most fun you’ll have all summer.’ and from the trailers I’ve seen so far, I could not agree more.

Seriously, go and see this film!

Oh, and as a very cool little bonus, I just HAVE to share this poster. It’s been created by Yoji Shinkawa, the designer of the titular mechs in the Metal Gear Solid franchise, and I think it’s just incredible: 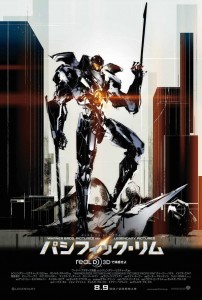