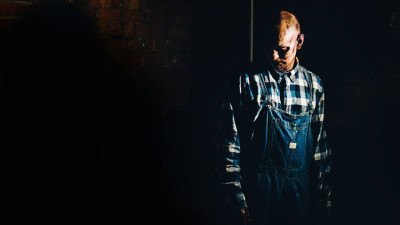 I’ve always loved anything zombie-related; I watch The Walking Dead fairly religiously, I love zombie games and I watch a lot of zombie movies – even if they end up being terrible. So I was pretty hyped when I found out that I was going to particpate in a virtual reality zombie experience.

Virtually Dead it is an immersive theatre and gaming experience, you get to interact with actors and be one of the first people to use mainstream VR – in this case the soon to be released HTC Vive. If you’re a big fan of zombies then VR is pretty much as good as you’re going to get, bar actually living in the zapocalypse!

The whole thing kicked off at 8:25PM, where we had to go stand at a random street location in East London and we were met by some hostile army-types, who weren’t very big fans of me (let’s just say I have a bit too much attitude to ever make it in the army) and made us stand in formation before boarding an army vehicle to take us to a remote warehouse. Oh, and they made us do star jumps and stuff. Urgh – exercise. The truck was pitch black and blaring with music, and when we reached the warehouse we were given our waivers. Because of these waivers I can’t really go into much detail on what happened once we arrived, but I’ll tell you what I can!

There are over 35 actors that play humans and the unfriendly-dead, and there is a storyline that goes from the beginning to end. You obviously can’t touch the actors because you’d probably end up punching them out of fear, mainly because there is a lot of walking and running in the dark… not to mention our friendly neighbourhood zombies jumping at you. There was a lot of screaming, some from a person in our group but mainly from other rooms – I’m not sure if this was other participants or actors setting the atmosphere, but it defintely added to the excitement. Strangely enough, there was also quite a bit of laughter – the actors playing humans really got us into it and kept us entertained – there were jokes and interactions then meant that you had to play along. You might also want to note that you should have thick skin if you want to participate, the actors aren’t afraid of ripping into guests! Oh, but on the less hilarious side, I ended up with some fake blood on my face – so you might not want to get involved if you are squeamish.

Now, the VR. It was pretty cool – I had to put on the headset, which was a lot lighter than I thought, and had two controllers. The graphics looked like something from the PS2, but you can’t expect everything to be perfect when we are just beginning to really explore VR as a mainstream form of immersive entertainment. The important thing was that the actual gameplay was pretty seamless, there was a full 360 degree view and there wasn’t any lag and the controls were perfectly responsive. The main point of the VR aspect was to get to shoot the walking dead, and there were quite a few to aim at – they do the slow leg dragging shuffle we’ve all come to associate with zombies, but some went full on World War Z and ran at your full pelt. You do get anxious when one is coming straight at you and believe me, they can come from any angle! I won’t lie, I felt pretty boss taking them all out with my dual wield shooting. The great thing is that you’re in competition with the rest of your group and you are given rankings, without boasting (or maybe boasting a little) I was totally in the highest group. Yay for not dying immediately in the zapocalypse!

It was a lot of fun, and something definitely worth doing – and you get to live out one of the coolest scenarios created by man… Because, honestly, who wouldn’t want to shoot their way through a herd of zombies?