For Throwback Thursday, we invited Associate Publisher Oliver Johnson to talk about Robert A. Heinlein’s classic, controversial novel Starship Troopers. Here’s what he had to say…

One of the greatest and most divisive  science fiction novels of all time, combining an edge-of-your-seat imagining of future interstellar war with a long meditation on citizenship and suffrage. Heinlein’s Terran Federation, in which representation is only earned through civic service, has jarred with some  and inspired others. The book is said to have changed military thinking in the half century since it was written and is on the US Marine Corps and US Navy reading lists. Starship Troopers is famous for its invention of a beloved SF trope: the Powered Armour Exoskeleton celebrated in too many other novels and movies to shake a nuclear rocket launcher at.

If your love is less for the cerebral than the visceral, the opening chapter is one of the most gut-wrenching and explosive war scenes ever written. 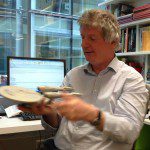