‘Compared to the dullest human being actually walking about on the face of the earth and casting his shadow there, the most brilliantly drawn character in a novel is but a bag of bones.’

Mike Noonan is a bestselling writer devastated by the loss of his wife, Jo, and their unborn child in an accident four years before the beginning of the novel. Since their death he’s been struggling with writer’s block. The novel’s title, Bag of Bones, is taken from Thomas Hardy’s gloomy estimation of the novelist’s craft , a quote which haunts Mike as he stares at his unfinished book. His metier seems as hollow as his life. 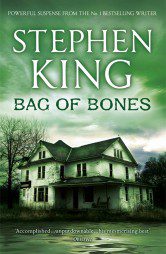 The couple shared a house on a lake in upstate Maine but Noonan has hitherto avoided returning in fear of the painful memories the journey  will evoke. But in a last desperate attempt to confront his ghosts and  to finish his  long overdue book he travels to Dark Score Lake. He little knows that from now on, it will be the ghosts who confront him.

From the moment of his arrival the strange and unexpected occur at relentless intervals. The dead Jo seems to be trying to communicate something to Mike: warning signs and portentous dreams are scattered throughout his waking and sleeping hours. He recalls that towards the end she had been spending more and more time away from home and now he discovers she was traveling up here to the house in secret. Was she conducting an affair? Or is the opposite the truth: is her ghost jealous of the growing attraction between Mike and Mattie, the young widow whose three-year-old daughter, Kyra, he rescues from the road one day? The lake seems cursed by something that happened decades ago when the house was owned by Sara Tidwell, a Blues singer persecuted by the local Dark Score community.  At last Mike finds his life does have purpose – to protect Mattie and her young child from the unfolding nightmare of the Lake.

Mixing suspense, horror, brilliantly limned characters and featuring a beautifully rendered portrait of Stephen King’s beloved Maine, the book is of added interest to writers as, like his next book, On Writing – which was interrupted by the terrible road accident the author suffered in 1999 – this novel gives a unique insight into a novelist’s life.