The Violent Century: The Reviews Are In! 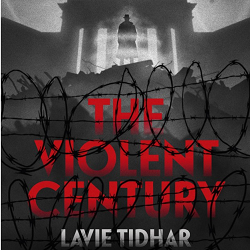 Posted on October 24, 2013 in Books with tags Lavie Tidhar

The Violent Century is out today! We’ve been telling you how brilliant it is for months, but, don’t take our word for it, read the fantastic reviews below.

Remember: if you’d like to win a copy of The Violent Century (plus a load of other awesome books) enter our What Makes A Hero? competition.

‘An alternative history tour-de-force. Epic, intense and authentic. Lavie Tidhar reboots the 20th century with spies and superheroes battling for mastery – and the results are electric.’

Dig it, kats and kittens: THE VIOLENT CENTURY is a brilliantly etched phantasmagoric reconfiguring of that most sizzling of eras – the twilight 20th. Lavie Tidhar lays it out like a dystopian dog!!! This book has it ALL: time travel, political intrigue, hellacious history itself!!! You’ve got superheroes in the guise of regular humans, you’ve got World War II!!! Viva Lavie Tidhar – “The Violent Century” is a torrid tour de force!!!!!

‘The Violent Century is an amazing book and as my first introduction to Lavie Tidhar’s writing I couldn’t have asked for anything better. Although I was first hesitant about the stylistic literary affectation he’s chosen to write with, once it became familiar, it felt right and each element of the writing, world and characters complemented each other wonderfully. I’d highly recommend this book to anyone.’

Tidhar has created a book that oozes excellence in both characterisation and storytelling. At the end, the story comes together in an awesome gymnastics workout for your imagination.

It’s the X-Men as written by John le Carré, a shadowy alternate history in which cynical Cold War compromises are all too real … A love story and meditation on heroism, this is an elegiac espionage adventure that demands a second reading.

He’s dealing with the grandest schemes on the largest of backdrops in time and place, and this level of awe-inspiring craft places him firmly within the highest tier of writers working today, no longer an emerging writer, but a master.

As well as being a wonderfully drawn and detailed historical espionage tale, The Violent Century is ultimately a very human story. It’s gripping, imaginative and, finally, moving.

‘Lavie Tidhar has created a big, sprawling work, slipping deftly between time periods and locations to tell a story, at once broad and intimate, of super powered secret agents across several decades.’

The cover asks ‘what makes a hero’? That may be underestimating what Tidhar achieves with this novel – through the mix of characters and situations, he provides an insight into what it takes to be human, and what can happen when we lay that humanity aside. It’s a powerful novel, which will no doubt reward rereading.

Violent Century’s case isn’t just a great piece of superhero fiction, but a beautiful novel of cultural and literary merit

…From plot to structure to theme, the novel is simply special. It’s as if Ian Tregillis’s Bitter Seeds had been written by Night Circus author Erin Morgenstern, a superhero war novel with a sense for historical detail and conscious of its ability to impact with structure and style. Tidhar has the chance to become this generation’s Ursula LeGuin, an author who is equally capable of engaging readers on a surfeit of levels, as socially conscious as he is literary, and as reckless as he is in control. The Violent Century is unquestionably one of the finest novels of 2013.

Lavie Tidhar is no longer a rising star in the genre, but one burning bright.

At the last, Lavie Tidhar’s latest is at once a love story, a tragedy, a spy novel, a memoir of a friendship, an exposé of the horrors of war, and a very serious study of the superhero: the origins of the concept as well as its relative relevance. The Violent Century is a difficult text, yes, but one that gives as good as it gets.

The Violent Century is a well-researched and lovingly constructed piece of fiction that, despite its science fiction elements, still manages to remain well within the bounds of realism.

Lavie Tidhar is rapidly becoming one of the most important writers of speculative fiction today. The Violent Century is the work of a writer with talent and confidence to burn. Unlike anything else you’ve ever read, its combination of spy thriller and superhero adventure make for an unusual, but inspired, combination. It’s a wonderful, engaging and thought-provoking novel, written with a style as original as the story itself, and presented by Hodder in a beautiful package that will be hard to resist, even for the most casual collector. Quite simply: perfect!

HOLY LE GOD YOU PEOPLE: Seriously go buy this book. It is without a doubt the best thing I’ve read this year.

One comment on “The Violent Century: The Reviews Are In!”