The Undead World According to Adam Baker 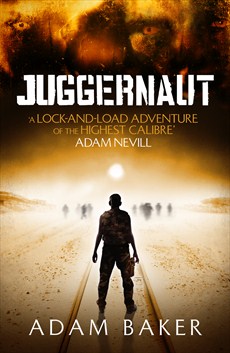 An ancient Soviet space station begins to decay in its orbit. Pieces of it re-enter the Earth’s atmosphere. Fiery meteorites streak the sky.  Sonic booms shatter windows. When the carbonised wreckage strikes the Earth, the impact areas are cordoned off amidst fears that the material might be radioactive. But it’s not radiation sickness that emanates from the sanitised zones. Somewhere out there in space a disaster occurred that threatens civilization.

Is it an alien pathogen? A bio warfare experiment gone wrong? The effects are the same.  An infection spreads from the contaminated waste, causing  metal sarcomas to sprout from the bodies, and take over the consciousness, of those afflicted. The pathogen is spread by bite so the shambling undead might be called ‘zombies’…  but they’re something more. Much more. They seem to be connected to a hive mind intent on the destruction of humanity. Soon the world is laid to waste, and humanity teeters on the brink of annihilation.

The story begins in Iraq under Saddam. The first piece of debris that falls to earth is a re-entry vehicle with a body inside, an escapee from the horror unfolding in space. The cosmonaut is the first plague bringer. The vehicle is moved from the desert to a hidden valley in North West Iraq which soon becomes known as the Valley of Tears. Everyone who comes into contact with the re-entry vehicle dies, quite horribly (yet, of course, they don’t die). Only one man escapes, Colonel Jabril.  Following the regime’s defeat in the Second Gulf War, Jabril contacts a team of mercenaries to return to the Valley of Tears. The mercenaries under the command of plucky Lucy Whyte think they are about to get their hands on a pot of Saddam’s gold, but Jabril has another agenda: revenge.  (Juggernaut, Hodder 9781444709087 £6.99)

Fast forward to a few years past today. At the top of the world, on an isolated Arctic drilling rig, the Kasker Rampart,  a skeleton crew await decommissioning and repatriation. Among them is Jane Blanc, a suicidal vicar who has gone to the wasteland to find herself. But the long-awaited ship, meant to take Jane and the crew home, never arrives.  The comms begin to break down amidst news reports of riots and massacres around the world. And then… silence. It becomes clear that no one living is coming. But something is on its way. As food and fuel become increasingly scarce, Jane and the crew of the Kasker realize that they are no longer alone: a cruise ship drifts into the platform’s radar field. Is it a way out for the marooned crew, or has the apocalypse finally arrived? (Outpost, 9781444709049 £8.99)

New York City, a few months after the events described in Outpost. They tried their best to contain the disease but block after block of the city fell until the infected ruled all but its subway system, where a last few survivors hold on. The President has no option. In order to contain the disease, he is forced to make the impossible decision, and bomb New York. Manhattan will be uninhabitable for the next quarter of a million years, but it might be humanity’s last chance. But, when the bomber with the five kiloton nuclear device is just over Central Park, a last, desperate message is received from the ground: ‘Abort the drop; we’ve found the vaccine!’ But it’s too late:  the bomb is dropped and New York City becomes a radioactive wildernness. Now Captain Nariko, commander of a specialist fire and rescue crew, is choppering in to see if there is any sign of the missing doctor in the deserted subway station where the last transmission came from. Her success or failure will determine whether humanity has any hope of survival. (Terminus, Hodder 9781444755855 £13.99)

Adam Baker’s three novels (a fourth is to come next year) are minutely described and expertly researched thrillers with a horror edge and a nod towards the science fictional. He specialises in elliptic, economical prose where not a word is wasted. And his specialty is feisty heroines, who take no guff from anyone and dominate the narratives into which they are plunged. Each of these books is a guarantee of an edge-of-your-seat fairground-thrill of a book.

2 comments on “The Undead World According to Adam Baker”