The Strange Trilogy by Elliott Hall 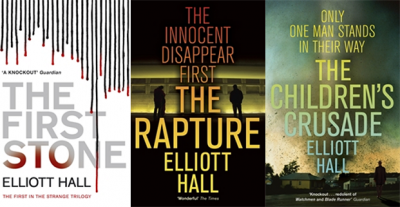 Posted on November 5, 2013 in Books with tags Elliott Hall

What is The Strange Trilogy?

An epic of the imagination; a brilliantly created universe; a mirror to our nearly-world; an action-packed mystery; an exploration of identity and humanity; a call to arms; a dark mélange of horror and delight to be devoured, shocked by, beguiled by, and applauded as one of the most astonishing and original collection of novels in years.

It takes the dark crazy world of LA noir and turns it on its head. Paying homage to the genius of Dash Hammett, Raymond Chandler and the Demon Dog of Crime, James Ellroy, it is nevertheless a wholly original take on the genre. It also evokes the craziness of Joseph Heller, the deft mastery of Neal Stephenson, the blackly comic eye of Jasper Fforde, the dysfunctional world of Imperial Life in the Emerald City, and the theological stretch of Philip Pullman… But these are just reference points for the reader. The Strange Trilogy and the world it evokes is entirely itself.

If you’re intrigued, try The First Stone and see what got me so excited when it landed on my desk… When Felix Strange is approached by Ezekiel White, head of a sinister new state security force, to investigate the murder of a high-ranking evangelist who has been found strangled in compromising circumstances in a seedy hotel room, he has little option but to take on the case. But in an America now governed by Christian extremists, Strange knows that his hiring for the job is no accident – someone, somewhere, is using him for their own ends. In a race against time, and knowing that every move he makes will be watched, Strange must protect those closest to him while uncovering a conspiracy that reaches the very heart of his newly fundamentalist nation.

The First Stone is one of the most stunningly original debut crime novels I have ever read.  It’s both an epic of the imagination and an action-packed mystery set in a time and place all too chillingly close to our own.  That the author wrote it before he turned thirty is, I think, remarkable. And for a taste of Elliott’s own particular and brilliant view of the world, visit: http://elliott-hall.co.uk/blog/.

Praise for The Strange Trilogy:

‘A knockout debut with the confidence to establish its world gradually … Strange’s sardonic wit makes him the perfect guide to his troublingly familiar landscape’ –  John O’Connell, Guardian

Kate Parkin is an editor at Hodder & Stoughton.