We have a special treat from our friends at Jo Fletcher Books today – an extract from award-winning author Lisa Tuttle’s The Somnambulist and the Psychic Thief!

In The Somnambulist and the Psychic Thief a crime of puzzling circumstances sweeps London, it involves a somnambulist, the disappearance of several mediums, and a cat stuck up a tree. There’s only one team for the job. Hard-up detective duo Mr Jasper Jesperson and his assistant Miss Lane must investigate the seemingly supernatural disappearances of the psychics and defy the nefarious purpose behind them.

If that doesn’t whet your appetite, the cover features a full moon, an eerie castle, a top hat… and some pretty formidable ruffles. Scroll on down for an extract. 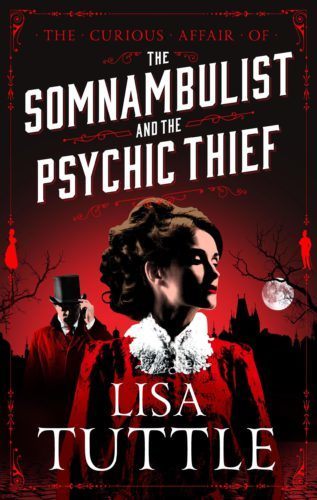 The bag that had been light enough when I took it down from the train grew heavier with every step, until I was obliged to stop and set it down for a few moments. As I caught my breath and rubbed my aching arm just outside a newsagent’s shop in Gower Street, I casually read the notices on display in the window. Amidst the descriptions of lost pets and offers of rooms to let, one gave me pause:

Must be literate, brave, congenial, with a good memory &

willing to work all hours.

Apply in person to:

Why not? I thought. I had always enjoyed solving mysteries, and had nothing to apologise for where brains, observation and memory were concerned. The advertisement said nothing about the use of weapons or physical strength. After all, he was not looking for a bodyguard, but an assistant.

I looked from the number on the card to the two doors immediately right of the window where it was displayed. One door, marked 203, led into the shop. The other, painted glistening black, bore a brass plate inscribed Jesperson.

My knock was answered by a lady in early middle age, too genteel in dress and appearance to be mistaken for a servant.

I told her I had come in response to the advertisement, gesturing towards the shop window as I spoke, and she let me in. There was a lingering smell of fried bacon and toasted bread that reminded me I’d had nothing to eat since the previous day.

‘Jasper,’ said she, opening another door and beckoning me on. ‘A lady has come to apply already, a Miss . . .?’

‘I am Miss Lane,’ I said, and walked into a room where I immediately felt at home.

The general atmosphere of a pleasantly crowded, comfortable, cheerful place, rich with the familiar scents of old books, paper and ink and tobacco, toast and tea, is just what I like, in a home or an office, and this room appeared to be office and living room in one. The floor-to-ceiling bookshelves, crammed with volumes and adorned with small trinkets, oddities, photographs and postcards, gave it the look of a slightly eccentric scholar’s study, as did the very large cluttered desk, piled high with papers and journals, but there were also armchairs near the fireplace and a table bearing the remains of breakfast for two. This quick impression was all I had time to absorb before Mr Jasper Jesperson, springing up from his seat at the table, commanded all my attention.

He was excessively tall and very young in appearance – the smooth, pale, lightly freckled face beneath a crown of tumbled, red-gold curls was that of an angelic child. But his blue eyes were sharp and penetrating, and when he spoke his voice was deep and well-modulated.

‘How do you do, Miss Lane? You fancy yourself a detective, do you?’

‘I do not say so. But you advertised for an assistant, someone literate, brave, with a good memory and willing to work all hours. I am all those things, and I hope you will find me congenial.’

His eyes met mine and something sparked between us. It was not that romantic passion that poets and sentimental novelists consider the only connection worth writing about between a man and a woman. But there was curiosity in that look, on both sides, and a tentative recognition – or at least the hope – that here there might be a congeniality of mind and spirit.

Mr Jesperson nodded his head and rubbed his hands together. ‘You have worked before, of course, in some capacity requiring sharp perceptions, careful observation and a bold spirit, yet now you are suddenly cut adrift, in need of employment—’
‘Jasper, please,’ Mrs Jesperson interrupted. ‘Show the lady some common courtesy!’ Laying one hand gently on my arm, she invited me to sit down and offered me a cup of tea.

‘That would be lovely, thank you.’

She lifted the fine white china teapot, assessing the weight of the contents with a practiced turn of her wrist. ‘I will fetch more. Would you like a plate of bread and butter, or anything else to eat?’

A lady always refuses food when she hasn’t been invited to a meal – but I was too hungry for good manners. ‘Bread and butter would be most welcome, thank you.’

‘I’d like more as well, please, Mother – and don’t forget the jam.’

She raised her eyes heavenward and sighed as she went away. Her son did not notice, his attention focused upon me. ‘You have been in the Highlands, in the country house of a wealthy family. You expected to stay there for the whole of the summer, all your needs taken care of, until something unpleasant happened, or – no, you made a shocking discovery, in result of which you terminated your visit and left at once. You travelled down by the night express train, but once arrived you were at a loss as to where to go in this big city, for you have no family here, and insufficient funds for what might be an extended stay in a good hotel. Thinking of the good and inexpensive lodgings for women students at University College London where, I venture to guess, you may have been a student yourself—’

I interrupted him. ‘Now you have gone too far.’

‘Self-educated? I do beg your pardon. I, too, am happily unmoulded by any conventional school or university. But I remain fixed in my belief that you were in search of lodgings when you turned onto Gower Street.’

‘I was not,’ I said firmly. ‘My first priority was to find employment, and to that end I was headed to Oxford Street, where there is a well-known ladies’ employment bureau.’

He stared at me, crestfallen. ‘Was I wrong about everything else?’

‘Well, no,’ I admitted. ‘But anyone with eyes might guess I’d come from Scotland considering the time of day and that there are no foreign stickers decorating my portmanteau.’

‘And the abrupt departure? I was right about the shocking discovery, was I not?’ He had recovered some of his confidence.

But I remained resolutely unimpressed by his deductions, as I explained: ‘I was on foot, alone, there not having been time to send a letter to inform my friends of my impending arrival, and I have no family here at present. I think almost anyone might have made the same assumption.’ I sighed. ‘Though I do not deny that a discovery did shock me – I found I had been wrong to ascribe honesty and strict professionalism to someone I counted as a friend. Perhaps I should not have run away, but stayed to confront her with the evidence . . . but there is no need for me to go into the details now.’

‘Of course not,’ he said warmly. And then: ‘It’s yours. Do not worry about references – you are your own best reference. The job is yours, if you want it.’

Although pleased, I could not help feeling he was being a bit rash in offering to hire someone he had known for barely five minutes as his assistant. Or was it my own lack of caution that I queried? I was in desperate need of security, but it was surely foolish to expect it to be supplied by a man I had just met, simply because I felt comfortable in his room?

‘I should like to know a little more about this job, first,’ I said cautiously. ‘What would be my duties?’

‘Duties is the wrong word. Your role, if you like, would be that of an assistant-detective, helping me to gather clues, deduce motives and solve crimes by doing whatever that might require. You’ve read the Sherlock Holmes stories?’

‘Of course. I should point out that, unlike Dr Watson, I’d be no good in a fight. I have a few basic nursing skills, but—’
‘Don’t worry. My mother’s the nurse. I’m a crack shot and mastered certain skills studied in the Orient, which give me an advantage in unarmed combat. I cannot promise to keep you out of danger entirely, but if that does not frighten you . . .?’ He took the answer from my face and broke into a broad smile. ‘We’re agreed?’
How I longed to return that smile and take the hand he offered to shake upon it. But without a home and only twelve shillings to my name, I must have more. ‘This is awkward,’ I said. ‘But again unlike Dr Watson, I have no medical practice to provide me with an income . . .’

‘Oh, money!’ he exclaimed, with that careless intonation possible only for people who have never worried about the lack of it. ‘Of course, you should receive a percentage – depending upon the extent of your contribution, it might be twenty or even fifty percent of whatever the client pays. And if you wished to write up the more interesting cases and sell them to the magazines, you’d keep whatever you made from that.’

Mrs Jesperson came back into the room with a laden tea tray as her son was speaking.

‘I cannot pay you a salary,’ he went on. ‘The best I can offer is an equal share in whatever comes.’

My heart was sinking fast. ‘I wish I could afford to agree,’ I said sadly. ‘But my financial circumstances are too precarious – I cannot even afford a week’s rent on a furnished room in Bloomsbury; not if I wish to eat, too.’

‘But you can stay here.’ exclaimed Mrs Jesperson. She looked up from pouring the tea to frown at her son. ‘Didn’t you explain?’

He took a teacup from his mother and handed it to me. ‘I thought you might have deduced as much from the wording of my advertisement,’ he said to me calmly. ‘The part about working all hours – my assistant must be close by, ready for any eventuality. It’s no good if I must write you a letter every time I want your help, or send someone to fetch you.’

‘There’s a room upstairs, furnished and waiting for an occupant,’ said Mrs Jesperson, handing me a plate of white bread, thinly sliced and thickly buttered, and then a little glass bowl heaped full of raspberry jam. ‘And I provide three meals a day.’ My worries vanquished, I gave Mr Jesperson my hand and thus began a new chapter of my life.

Pre-order The Somnambulist and the Psychic Thief here.

Lisa Tuttle was born and raised in Texas, but moved to Britain in the 1980s. She now lives with her writer husband and their daughter on the side of a Scottish loch. She has written more than a dozen fantasy, science fiction and horror novels, who’s fans include George R.R. Martin with whom she has collaborated on a number of works. She has won the John W. Campbell Award, the Nebula Award and a BSFA Award and has been shortlisted for the Arthur C Clarke Award, a Hugo Award and a James Tiptree, Jr. Award.