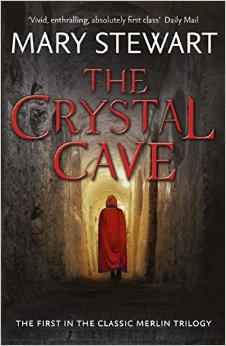 Posted on October 1, 2013 in Books with tags Review Project, The Chrystal Cave

I remember perfectly how my mother introduced this novel to me, more than twenty years ago. She was so enthralled by The Crystal Cave and its sequels, she explained, that she would read while eating breakfast, think about the book all day, and then rush home from work in the evenings to read more.

What is this series that so engaged my mom that her eyes light up when she talks about it, decades later? Basically, it’s a retelling of the Arthurian legend – from Merlin’s perspective. Only this isn’t the cuddly, bearded Merlin of The Sword in the Stone. This Merlin is young and insecure and uncertain.

Published in 1970, The Crystal Cave at first seems like an odd book to come from the pen of Mary Stewart, best known for her romantic suspense novels (she’s considered one of the genre’s founders). But the connections make a little more sense in context: Arthur was big business in the 1960s, when she was writing The Crystal Cave. Between the on-going popularity of TH White’s The Once and Future King (1958), the musical Camelot (1960), and even the
post-assassination connection between Kennedy and that musical (which he apparently loved), King Arthur was pretty much inescapable.

So, in retrospect, it makes sense that Stewart, admired for her skilfully plots, sensitive characterizations, and gorgeous prose would find the story of sensitive young Merlin worth exploring.