The Hodderscape Review Project: The Copper Promise, by Jen Williams

Posted on February 3, 2014 in Books with tags Hodderscape Review Project

As a special treat, our Hodderscape Review Project title for February comes courtesy of our friends at Headline. Publishing this month (13 Feb, to be exact), we’re delighted to present The Copper Promise, a romping, stomping debut from Jen Williams. It’s an awesome book, full of action and adventure and derring-do. And dragons. (Who doesn’t love a dragon?)

When it was first published, George R. R. Martin’s A Game of Thrones was a real breath of fresh air. Today, aided by the wildly successful HBO series, it has proved to be the proverbial game changer. Epic fantasy has become grittier, darker; characters are no longer just good or evil – elves versus orcs – but are now every shade of grey.

Perhaps this is partly why a lot of modern fantasy feels very close to historical fiction to me.  Now I love historical fiction, so I’m not saying that’s a bad thing … but still, I can’t help but feel that the genre has lost some of its magic. A part of me misses the quests, the heroes, the – dare I say it? – the dungeons and dragons.

That is why I am so thrilled to be publishing Jen Williams’ debut novel, The Copper Promise. It combines all of the complexity and darkness of modern epic fantasy – just read the first chapter and you’ll see what I’m talking about – with the energy and excitement of the classic high fantasy romp.

So the characters are rich and real, and their experiences change them in a credible way. But you can also expect adventure, betrayal, gods, monsters – scrap that, an army of monsters – and, of course, a kick-ass dragon. 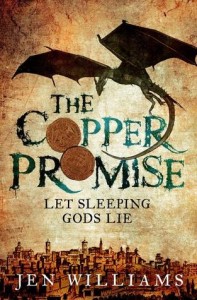 3 comments on “The Hodderscape Review Project: The Copper Promise, by Jen Williams”