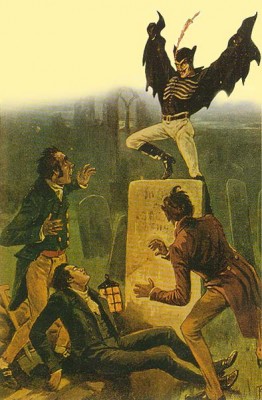 Billed as the UK’s biggest ever Gothic exhibition, the British Library’s current exhibition explores 250 years of the gothic imagination across literature, film and art. So, if your wardrobe consists of various shades of black and you like books where people run away from things screaming, you should book your ticket for the exhibition now. 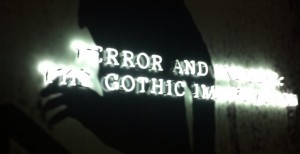 The British Library gothic exhibition opens with a video where Sarah Waters, Mark Z Danielewski and Neil Gaiman talk about their own definitions of ‘gothic’. These range from very broad statements about fear and terror, to Gaiman’s amusing definition of the gothic as any book where the front cover could be someone running away from a dark house holding a candelabra. This provides a neat introduction to an exhibition which explores the birth of gothic literature, and its genesis across its 250 year existence. 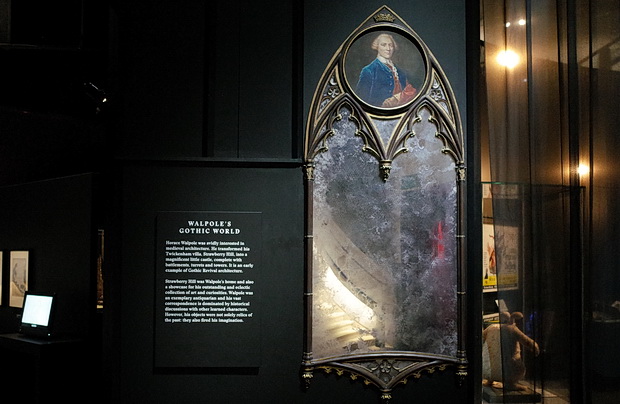 Proceeding in linear fashion, the exhibition opens with The Castle of  Otranto, generally regarded as the first gothic novel. You enter the world of Horace Walpole, decked out like Elizabeth Bathory’s boudoir with diaphanous black sheets and a mirror that you wouldn’t want to do your makeup in. This section explores the close ties between gothic architecture and literature, and intricate illustrated editions of The Castle of Otranto sit alongside building models and architectural plans for Horace Walpole’s Gothic Revival villa Strawberry Hill.

The desolate castles and sublime landscapes then give way to the urban Gothic, with penny dreadfuls and Dickens’ lurid descriptions of Victorian London. Exhibits such as the one below from the Illustrated Police News report on Jack the Ripper, show how gothic fictions infused news reporting. 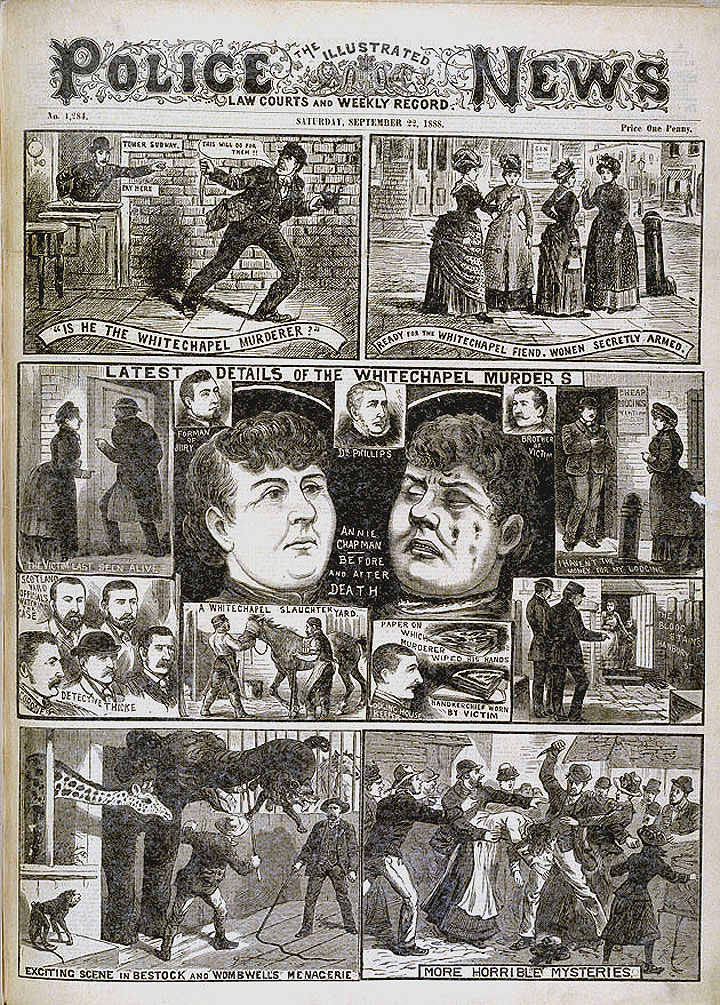 Where the exhibition became most interesting was when it drew connections across history; an illustration of Victorian folklore figure Spring-heeled Jack next to original artwork from Arkham Asylum; Jim Crace’s Harvest next to a clip from the Wicker Man; Ben Wheatley talking about his 2013 film A Field In England opposite Paul Nash’s landscape photography. My only complaint about the exhibition was that I wish there’d been more of this. It would have been interesting to view Danielewski’s House of Leaves alongside other works of architectural gothic such as Gormenghast and The Castle of Otranto, but the exhibition’s historical structure limited these kind of comparisons. 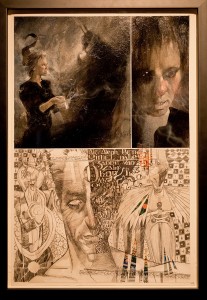 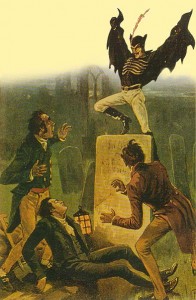 Dracula had a whole chamber to himself, and this did allow for some nice cross-historical movement with handwritten manuscripts from the book, clips from films and a vampire slaying kit. Though, I would say that not including a clip from the Buffy Dracula special was a missed opportunity (though, I am speaking as someone who gets heart palpitations whenever the Buffy theme track comes on). Inevitably, some strands of gothic fiction weren’t explored. Southern gothic didn’t make an appearance, and despite a very full section on the gothic in contemporary children’s literature, contemporary gothic fiction didn’t get much breathing room. Kim Newman’s Anno Dracula series would have been a great addition to the Dracula room, and the inclusion of Stephenie Meyer but not Anne Rice brought me out in a cold sweat.

But those are only small complaints, and Martin Kerr’s photos from Whitby Gothic Weekend at the end of the exhibition were a wonderful way of concluding, and showing that goth is still alive and well (and possibly overheating slightly).