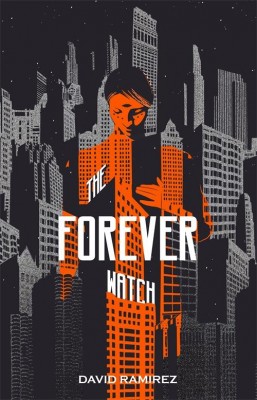 Posted on May 1, 2014 in News with tags David Ramirez, New Releases, Science Fiction, The Forever Watch

David Ramirez’s debut THE FOREVER WATCH publishes today. And the reviews are in – you won’t want to miss this!

The Forever Watch, David Ramirez’s stunning debut novel, publishes today! Featuring incredible cover art by Raid 71, The Forever Watch is the story of an impossible murder and the woman who risks everything to understand it. We’re incredibly proud to be publishing this first novel by an incredible new talent.

The Noah: a city-sized ship, half-way through an eight-hundred-year voyage to another planet. In a world where deeds, and even thoughts, cannot be kept secret, a man is murdered; his body so ruined that his identity must be established from DNA evidence. Within hours, all trace of the crime is swept away, hidden as though it never happened.

Hana Dempsey, a mid-level bureaucrat genetically modified to use the Noah‘s telepathic internet, begins to investigate. Her search for the truth will uncover the impossible: a serial killer who has been operating on board for a lifetime… if not longer.

Vivid, action-packed, and yet filled with scientific plausibility, The Forever Watch propels you on tense voyage of mystery, surprise and discovery.
David Brin

Starting out as a space opera and unfolding as a dystopian thriller, this read weaves together sci-fi cornerstones—including genetic enhancements, artificial intelligence, and covert aliens—without getting messy. Ramirez’s fast-paced novel will captivate readers who seek determined characters, intricate world building, and constant twists.
The Booklist

A superb book, cooly plotted and full of meance.
– SFX (Five stars and a recommended read)

The Forever Watch is a rich and evocative story, is has many dark influences and in the end everything comes together producing an hauntingly beautiful story. Definitely recommended.
The Book Plank

An excellent novel – David Ramirez establishes himself as a fantastic author who’s certainly one to watch with a complex, entertaining and original science fiction novel that comes highly recommended –
you won’t want to miss this.
Bane of Kings