The DnA of Guardians of the Galaxy

Posted on July 9, 2014 in Film with tags Comics, Guardians of the Galaxy

Later this month, Marvel Studios will release their riskiest movie yet. For a studio that’s made its name with films starring characters it couldn’t sell off on the cheap while bankrupt in the 90s, that’s certainly saying something. Guardians of the Galaxy is an eccentric space romp featuring a talking raccoon, a humanoid tree and lots of half-naked green people. Chances are, it’s going to be awesome.

What makes the GotG film all the more incredible is that the source material is relatively obscure. Your average man on the street may not have heard of Iron Man in early 2008, but the character had a long history in comics, cartoons, games and toys. While the Guardians name is almost as old, the team being adapted for the big screen was only put together a few years ago. 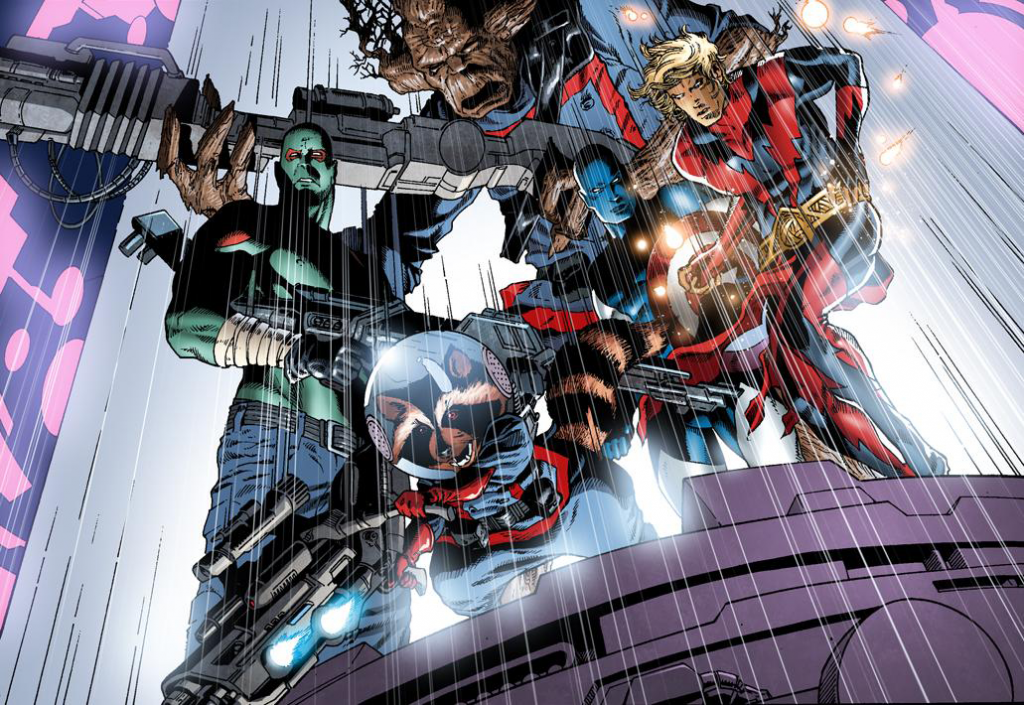 Back in 2005, the cosmic corner of the Marvel Universe was lying fallow. It had been years since anyone had shown any sense of direction for it. To shake things up, Marvel assembled a host of writers and artists and created Annihilation, an event series that set about radically altering the stale cosmic status-quo through a full scale invasion of extra-dimensional insects. Old standards like Thanos were killed off, meandering characters were given new direction and some, most notably Nova, received radical redesigns, breathing new life into them.

The success of Annihilation inevitably led to a string of sequels and spin-offs, the majority of which were written by the team of Dan Abnett and Andy Lanning (or DnA as they’re often known). Guardians of the Galaxy was one of the centre-pieces, a wild, witty book about misfits trying to protect the galaxy from itself. 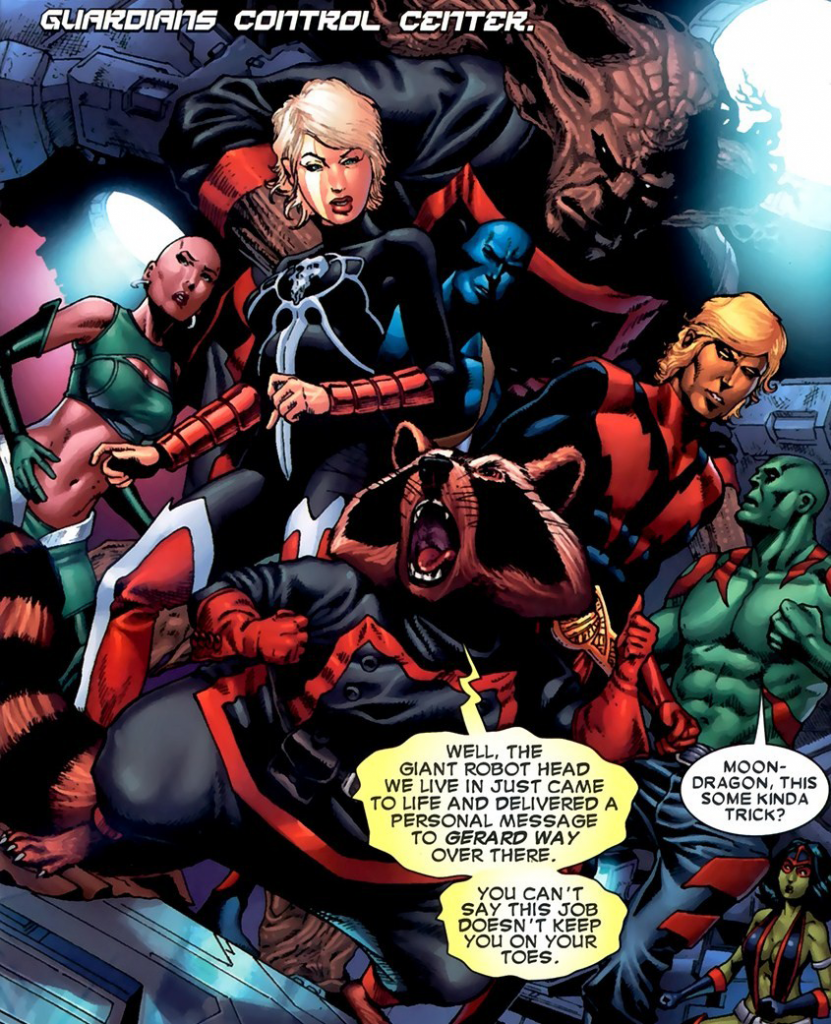 Through Guardians and sister titles like Nova, DnA (in collaboration with Keith Giffen initially) revived an entire branch of the Marvel Universe. There are two main types of writers that work in a shared universe. Those that, for better or worse, think mainly of their own ideas, regardless of the impact they have on other titles. And then there are those that use the universe to enhance their stories, picking up characters and concepts that have been discarded, broken or forgotten, and weave them into the story they want to tell, to the benefit of everyone. Chris Claremont was a master of this on his original X-Men run, and with Guardians of the Galaxy, let alone the full span of their cosmic cycle, DnA proved to be just as good. The book has ties to titles as afar afield as Fantastic Four and Rom: The Space Knight and instead of this making it inaccessible, it creates a rich, textured world with a sense of scale and depth that rivals Game of Thrones.

The characters in GotG may look oddball and eclectic on a movie poster, but that’s nothing compared to their heritage on the comics page. United under a team name that had been in disuse since the early 90s were: Adam Warlock, Drax and Gamora, cosmic characters whose heyday was 15 years earlier; Star-Lord, a forgotten and failed cosmic character of the 70s; Phylla-Vell, purposefully unpopular daughter of Captain Marvel; Bug, from long-since-lapsed 80s toy license Micronauts; third-string Avengers Mantis and Moondragon; Groot, a one-shot 60s Jack Kirby creature feature star; Rocket Raccoon, a deliberately goofy, kid-friendly character based on a Beatles lyric; Major Victory, the only member of the original (futuristic) Guardians and Jack Flag, a guy who was Captain America’s sidekick for two minutes. Oh, and Cosmo, a talking, psychic, Russian, cosmonautical dog 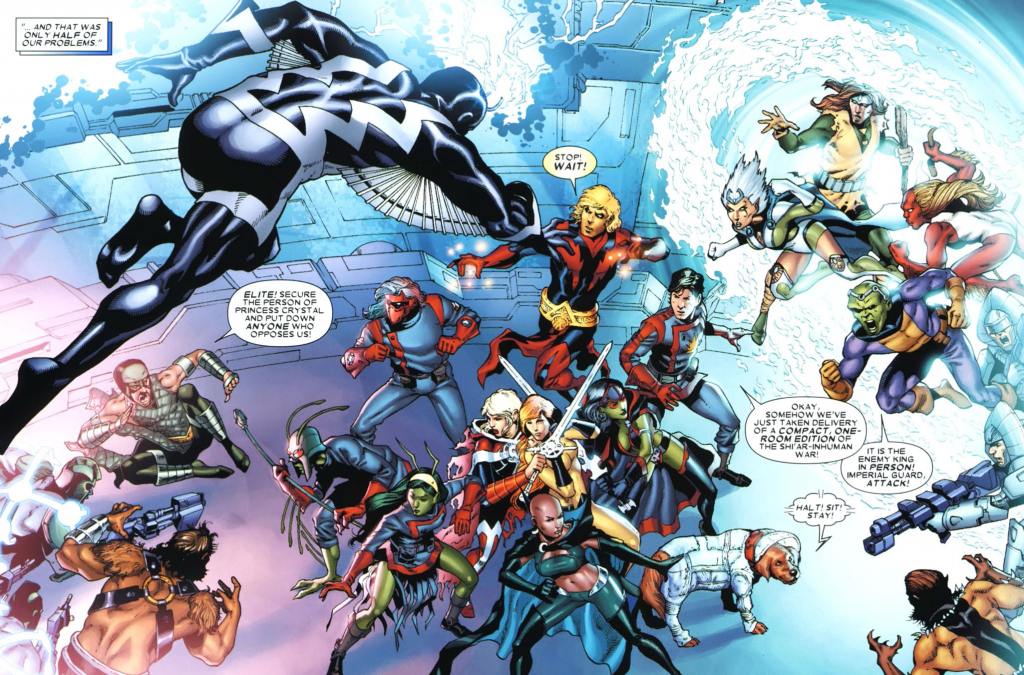 It’s hardly a team sheet destined to set sales charts alight. But the book worked magnificently. The team were all ripe for reinvention and reinterpretation. As a writer, there’s only so much you can do with an established name like Spider-Man or Thor before publishers object or readers reject it, but no-one cares what you do with the likes of Bug. The last appearance of Jack Flag was by Warren Ellis, who used him as a disposable example of why vigilante super-heroes are a bit sad and pathetic, leaving him crippled and imprisoned by state-sponsored super-villains. But DnA picked him up, gave him a lick of new paint and made Jack Flag work, a relatable everyman out of his depth in deep space.

It’s true that Guardians didn’t sell spectacularly. Both it and Nova rode the cancellation line of the sales charts for the span of their existence. But you can’t call either book unsuccessful. Their readerships were loyal and dedicated, which is perhaps why neither was outright cancelled. Both were put ‘on hiatus’ during the Thanos Imperative event, with Marvel being incredibly cagey about admitting whether that meant ‘cancelled’. In the end, it did and unfortunately, as is often the way with inventive corporate comics series, the cycle’s legacy was quickly dismantled by the very company that published it. Nova was replaced by a hapless teen that could synergise with the new Ultimate Spider-Man animated series. The Inhumans, given new drive and purpose by DnA, were put back in their box for use by the Fantastic Four. The Guardians were revived, but under the pen of Marvel’s favoured son Brian Bendis, who has consistently displayed a tone-deafness for the characters.

In a way, we have the film to thank for that. If Marvel Studio’s Kevin Feige hadn’t looked at that quirky little comic about a gun-toting raccoon, walking tree and an inordinate amount of green people and thought ‘that could be box office gold’, Marvel most likely would have left the Guardians to gather dust. A fondly remembered memory of a team that repeatedly saved the galaxy, because it wasn’t going to save itself.

Martin Smith is an author and blogger who loves comics – doubly so if they feature a talking raccoon or transforming robot. Recently, he watched every single Disney animated classic. He is recovering slowly.

Martin Smith is an author and blogger who loves comics – doubly so if they feature a talking raccoon or transforming robot. Recently, he watched every single Disney animated classic. He is recovering slowly.