Posted on May 14, 2014 in Television with tags Television Review, Werewolves

Teen Wolf – it’s not just for Michael J. Fox anymore. (Does anyone even remember the original movie?) Who cares. Abs!

“Oh go on, you’ll love it. It’s really funny, and the guys are really hot, and it’s about werewolves…”

After days of wrangling and pleading, I finally relented and sat down to watch Teen Wolf with my younger sisters. Why I didn’t acquiesce sooner I will never know. Now, it’s one of my firm favourites.

Teen Wolf’s essential plot line is that a regular teenager – Scott McCall – gets bitten by a werewolf when out in the woods one night, and so becomes one himself. He has to get on with normal everyday things like girls, high school, and lacrosse team (no, I don’t know why they chose lacrosse either, maybe it’s an American thing), and keep his werewolf side secret in the face of hunters and other, less well-meaning supernatural beasties. 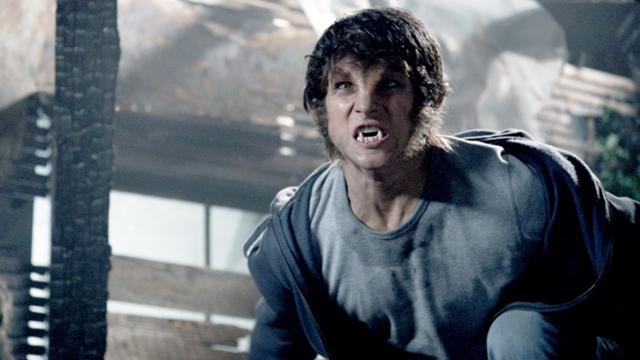 Nobody knows apart from his best friend Stiles, and another rather sinister looking werewolf in town: Derek.

Yes, one of the threats to the main characters is called Derek. Once you’ve stopped laughing about it, you actually do get used to it. Americans can’t be aware that people in the UK won’t believe the name ‘Derek’ could belong to a hot, young werewolf with abs like a Hershey bar. We’re more likely to imagine a 40 year old builder from Wolverhampton.

But once you get over the whole name thing, you’ve got this to enjoy:

So who is Derek? Derek is a bad-ass werewolf lacking in social skills. His whole premise in season 1 and 2 boils down to: ‘I’m lonely and don’t have any friends. Why doesn’t anyone like me?’ He solves the problem by turning various young people from Beacon Hills High into werewolves.

Anyway who cares about that, because he also has this problem a lot:

All he wants is friends and a decent shirt that fits.

If you’re not driven to watch television shows by the rack of hot men, then fear not: the female characters are great. E.g. Lydia – the redhead ‘pretty’ girl who goes out with the lacrosse captain – who is brilliant. They could have gone down the usual dumb-popular girl trope, but instead they added layers of depth in her fierce intelligence and vulnerability.

I suppose that’s what I quite like about this group in Teen Wolf: their vulnerability. It reminds me of how I felt about the characters in Buffy. I felt a lot more affinity with the students at Sunnydale High than I ever did with a single person in Dawson’s Creek. Like Buffy, Teen Wolf’s teenagers feel more ‘real’, more relatable. Jackson could have been your run-of-the-mill jock with an attitude problem, but there’s an aching sense that he is trying to make up for absent parents who never noticed him. You feel genuinely torn for Allison as she finds herself caught between love and her family. They’ve even handled a gay character – Danny – very well. Not something you tend to see with this sort of show.

Also I must warn you that Teen Wolf will make you want Stiles Stilinski to be your best friend forever. Because

a) he says what we all feel:

b) he dances how normal people dance:

and c) he isn’t afraid to be afraid every once in a while.

So I’d definitely advise you to give Teen Wolf a go. It’s rather like drinking wine at a dinner party. Mull the first glass at the beginning of the evening, then guzzle the rest when you can’t be bothered to talk to anyone anymore. It really is a lot of fun, with a great cast and a good dash of supernatural peril. They are moving through season 4 on American TV at the moment and it looks like it keeps getting better.