The sun is out in full force in London, but we’ve been turning down the heat in Hodderscape HQ to ensure the comfort of our polar bear and to make way for Tom Harper’s chilling Arctic thriller Zodiac Station. So, this week we’re picking out our favourite tales of icebound terror… 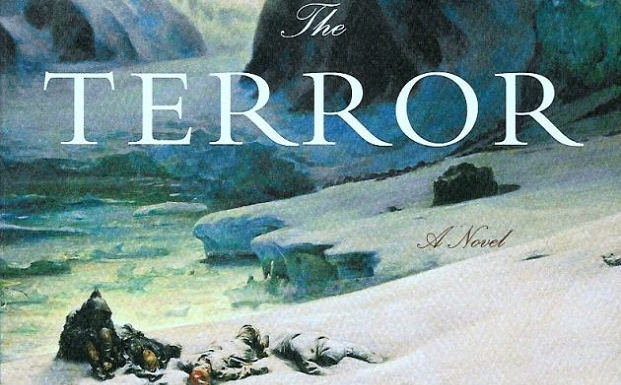 As London swelters in a heat wave the Dodo, with delicious irony, invites us to write about ‘icy peril’. Oh, for a shard of the frozen North to cool my Diet Coke, but the Hodderscape fridge splutters and coughs and is no more…

The great thing about ice is it locks people in, creates a closed environment in which weird stuff can happen: mainly psychopathic, murderous behaviour: our favourite! A book dear to my heart is Ice Station Zebra and there can be no mention of icy terror and claustrophobia without mentioning the immortal The Shining.

But today I plump for the iciest of all perils: what happens when  a ship, or in this case ships, become locked in an icy sea with no hope of escape.  Dan Simmons’ The Terror is based on a true life incident  and is a fictionalized account of Captain Sir John Franklin’s lost expedition of HMS Erebus and HMS Terror to the Arctic to force the Northwest Passage in 1845–1848. Of the 128 crew only three expeditionary graves have been found; the fate of the other 125 men remains unknown.  Simmons  presents a pressure cooker narrative of scurvy, cold, starvation, murder, cannibalism and a stalking, half-glimpsed horror that kills the surviving crew one by one. It is a literary horror masterpiece that ultimately takes its protagonist on a strange spiritual journey from which there is no return.

If you’re any sort of horror fan, you’ve probably seen the 1951 classic The Thing from Another World, and its Spanish/British rip-off/mash-up (with Murder on the Orient Express, perhaps?) Horror Express. (Horror Express stars Christopher Lee, Peter Cushing and Telly Savalis, so if you haven’t seen it you should go watch it right this instant.) I love the classic X-Files episode ‘Ice’ which owes a huge and obvious debt to both of the above. But there’s one ice-bound peril film to rule them all, and in the darkness… well, in the darkness tear them to shreds, turn into a giant inside-out two-headed spider-monster and then scuttle away.

That film is John Carpenter’s The Thing.

On a technical level, The Thing is amazing: it takes place in an isolated, and very much ice-bound, Antarctic research base full of scientists who are all straddling the fuzzy edge of totally off their rockers. So, you know, it’s claustrophobic and riddled with a sense of dread. And there’s the masterful escalation; an inexplicable incident and an act of humanity result in a lot of monstery violence. And then there are the monsters themselves: the creature effect from The Thing deserve our awe and our admiration, as they’re all puppets, models, stop-motion animation, and clever use of cutting and editing. Contemporary audiences found it a bit over the top, but time has been kind to The Thing. It sits alongside Kubrik’s The Shining as one of my all-time favourite horror films. (Hey, There’s rather a lot of ice-bound peril in The Shining too, come to think of it. Maybe I just like early 80s horror.)

Also: the film poster is so good. 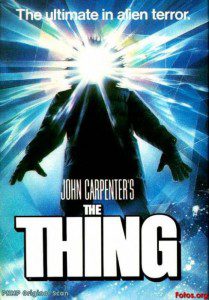 I am torn… Do I go with The Lion, The Witch & The Wardrobe or Frozen? (Both highly sophisticated choices as always with me!)

Given that it’s a book AND a film, The Lion, The Witch & The Wardrobe gets it this time. Peril in the snow doesn’t get better than this: a queen with magical powers casts a spell that causes an endless winter and…

Wait, isn’t that exactly what happens in Frozen too??

Oh well. If in doubt, break into song:

Doesn’t blood just pop in the snow? And, who better to bring on the blood than vampires? Snow plus vampires isn’t always a recipe for cinematic success (see: 30 Days of Nights) but coupled with intriguing characters, a  well-coiffed standard poodle and a poignant insight into the unique horror of adolescence, and you have an unforgettable vampire film. In Let The Right One In (or  Låt den rätte komma in if you’re feeling snazzy and don’t have to say it out loud), the blood flows but so do the feels. It’s a tale of blood lust, but also immortal angst (don’t worry: there’s no sparkling involved) and friendship, culminating in [spoiler alert] the most heartwarming massacre ever.

‘With 30 million skiers and snowboarders in the US and over 5000 chairlifts in operation, it’s only a matter of time before someone gets left behind.’

It wasn’t one of the best films I have ever seen but when it comes to frozen peril, it would be crazy not to mention the 2010 film, Frozen.  The premise of the film is simple (and horrifying), a trio of skier and snowboarders get trapped on a ski lift near the very top of a mountain on the last lift of the day.   Their choice is seemingly simple:   jump off the chairlift or freeze to death in the night, easy choice right? WRONG! My initial thought for the stranded snow lovers was to just jump – surely a few broken bones is way better than freezing to death but when you throw vicious, blood hungry wolves in to the mix, the decision seems a lot harder. On this matter, one of the trapped trio makes the very wrong decision to jump and what comes soon after is possibly the grossest thing I’ve seen (and heard) on film.  If you are squeamish then this film is definitely not for you – it really is one of the most disturbing films I have seen! Needless to say I haven’t been skiing since…