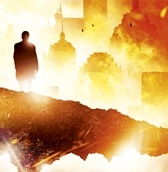 Bobby Dollar, the protagonist of Tad Williams’ urban fantasy series, is an advocate for the recently deceased, and he’s an angel… literally. But he’s no figurative angel. Bobby’s been around the block a few times – he’s seen it all and, frankly, takes it all for granted. (He’s even got his own cocktail.)

But in The Dirty Streets of Heaven, a soul goes missing, amping up the eternal war between Heaven and Hell, long on hold. And this time, Bobby’s right in the middle of it.

For the cover of the first Bobby Dollar novel we wanted to introduce Bobby in his adoptive home, the fictional San Francisco Bay Area city of San Judas. The cover pretty much designed itself – Bobby looking out over the big, bad city, a ray of light from above giving him a much-deserved ethereal glow. It’s a dark, beautiful, evocative cover, equal parts noir and low fantasy. 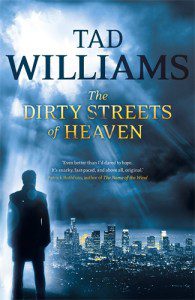 The Dirty Streets of Heaven, published 2012.

But in the sequel, Happy Hour in Hell, Bobby’s going to Hell. Literally. His on-again-off-again love interest, the Countess of Cold Hands, (who happens to be the girlfriend of the Grand Duke of Hell, himself no big fan of Bobby’s), has been dragged down to the infernal depths. So Bobby’s got to get himself down there after her. The book opens with Bobby taking his first steps on the Neronian Bridge, ‘a featureless, flat span of stone that stretched over a chasm so deep that, if we had been on ordinary old Earth, the hole would probably have gone all the way through the planet and out of the other side.’ 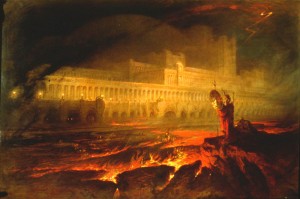 But this isn’t a bridge on ordinary old Earth. This is a bridge specially constructed to welcome the Emperor Nero to Hell, 2000 years ago. Bobby is using it today, to sneak in.

Naturally, the Neronian Bridge had to feature on Happy Hour‘s cover.

We asked the artist to take his inspiration from the extraordinary paintings of John Martin, but to add buildings – from all eras – to retain the urban aesthetic that’s so important in both noir and urban fantasy. We think you’ll agree the artist, Rhett Podersoo, did a phenomenal job. (And you might recognize a few of the other covers on his website, too…) 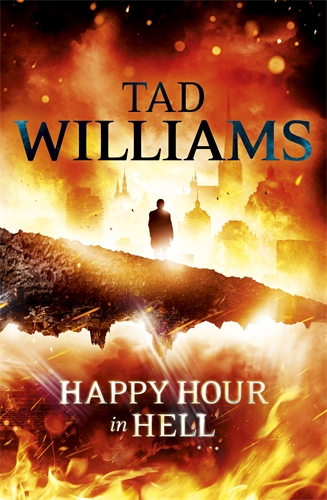