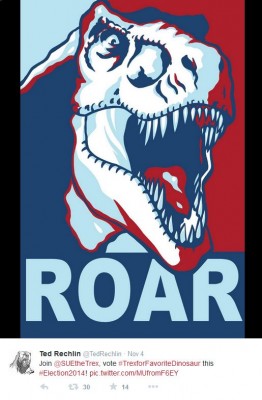 Posted on November 10, 2014 in Fun Stuff with tags Dinosaurs

There are a number of dinosaurs on Twitter and, while T-Rexes seem to show up most often (one wonders how they type, with those tiny arms – voice recognition software?), they aren’t the only sauropods in town! Here are a few of our favourites.

Sue the T-Rex @SUEtheTrex is the mother of all T-Rexes – maybe literally. She’s the largest T-Rex ever discovered and currently lives in Chicago’s famous (and famously beautiful) Field Museum. She’s also a delightful conversationalist and a feminist, as she follows @feministhulk on Twitter. 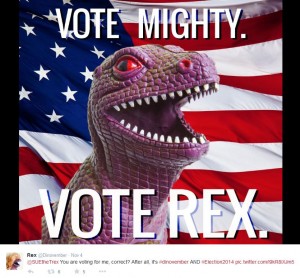 Trying T-Rex @tryingrex Trying T-Rex asks the questions we all quietly wonder about (or preface our blog posts with): how do T-Rexes do anything wiht those teeny arms? Trying T-Rex suggests that the answer is ‘with difficulty.’ 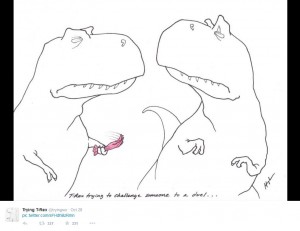 @Rex apparently owns Dinovember, despite being small and purple and, uh, plastic. And given to fits of braggodicio. We love Rex anyway. 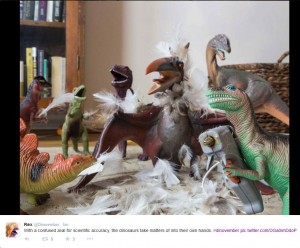 Rex is the dinosaur in Sue’s campaign poster, above. He – she? – was responding to this: 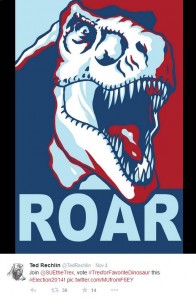 Dr. Dinosaur @Dr_Dinosaur We’re not entirely sure what kind of dinosaur Dr Dinosaur is, besides a belligerent one. But we love him all the same.

Mame the Giant Dino @Giant_Dino  A sauropod at the American Museum of Natural History in New York, Mame mostly talks about her days in the fashion industry, and eating. She does, however, occasionlly remember that she doesn’t have fingers.

Dippy the (London) Natural History Museum’s diplodicus: @NHM_Dippy The NHM’s Dippy isn’t the only diplodocus on Twitter – she’s not even the only one named Dippy – but she definitely has the most beautiful home. She’s also adorably self-conscious. 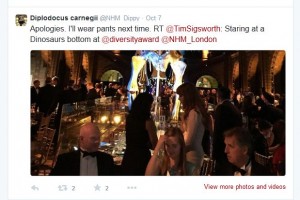 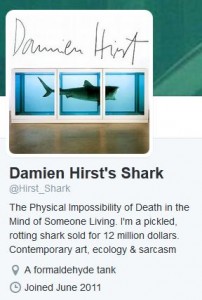 And you’re of course already following the Horniman Walrus (@HornimanWalrus) on Twitter, because you, like Queen Victoria, know your onions. 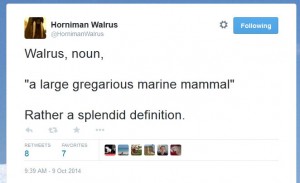