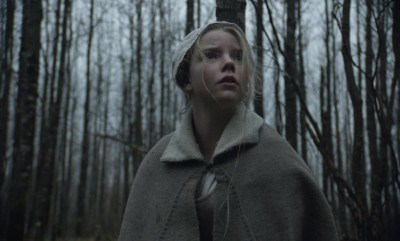 I’m not scared of witches. I don’t fear what lurks in the woods. I don’t worry about the Devil leading me astray and corrupting my immortal soul. The horror films that have scared me most have been ones like It Follows and The Ring, films very much located in everyday life, as I know it. Films that have me jumping when the phone rings, or looking over my shoulder as I walk home.

Yet The Witch, a film set in 17th century Puritan New England, terrified me. Not through cheap jump-scares (I am terribly susceptible to these) and oozing gore (again, terribly susceptible), but because it’s one of the few film experiences I’ve had where I’ve felt like I may actually be encountering evil.

It follows a family who have been excommunicated from a Puritan community in New England who are forced to up sticks and rebuild their home. Unfortunately they pick a spot right next to a rather menacing forest. The film follows their encounter with this wilderness and the evil that lurks therein, but I don’t want to give away any more than that. Not because what unfolds is shocking (some of it is), but because the experience of it unfolding is so harrowing.

The family, like us, have been transported away from their familiar home and are encountering an alien menace. They try and map it onto their Puritan fears of sin and the Devil, but they are as powerless to comprehend or prevent what’s happening to them as we are.

Despite The Blair Witch project, witches have never really captured the modern imagination in quite the same way that horror stalwarts like zombies, werewolves and vampires have. When you think of witches you probably picture Willow or Sabrina, not baby-devouring hags who live in the forest. Which, in a way is a good thing, because the  baby-eating hag is a horror created by a society that both feared and detested women. But, there’s also something kind of sad about the modern witch, relegated to being the helpful sidekick or concocting potions in her kitchen. The Witch restores this distinctively female mythical figure back to her former diabolical glory, but it’s not rehashing tired old sexism. It’s something very different, but I’ll leave you to find out just what that is.