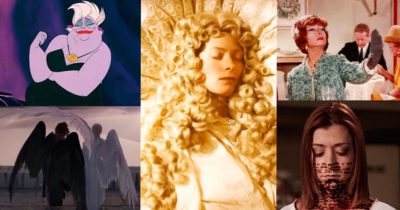 By Jack Shoulder and Trip Galey

Divas. Heroes. Icons. Whatever you call them, they’re found in every community: individuals who inspire and captivate, who break barriers and shine like a guiding light in the darkness, who act as touchstones for their fans. We stan. Like, by definition even!

And nobody stans like LGBTQ+ fans of science fiction and fantasy. We have all the regular reasons to love SFF and then some. The genre has given writers a space to explore different identities and cultures, often at times when such had to be hidden and coded. Some of these characters have even helped break barriers and acted as beacons for the LGBTQ+ community. It’s a powerful thing to see ourselves reflected in the stories around us.

PRIDE month is a time for celebration and protest, a time to revel in and take inspiration from the exemplars of the past so we can build a better future. So here, for your adulation, are 10 of our favourite queer SFF icons!

Mass-produced in 2719, in a time of severe social stratification, Cindi is an android who falls in love with a human and is sentenced to disassembly for that crime. In spite of this—or perhaps because of it—Cindi rises to the status of an almost messianic figure, an iconisation of the subjugated minority, the Other. Cindi also acts as muse to the musician that invented her, Janaelle Monáe (a member of the bi and pan communities). Throughout her appearances in concept albums, videos, and concerts, Cindi brings with her all the actinic brilliance of Monáe’s music and creativity. Her story inspires as she goes from service droid, to high class entertainment-bot, to something greater than the sum of her parts. Cindi is subversive, brilliant, and a reminder that even those relationships that may seem heteronormative on the surface can contain queer depths.

‘Your magic mind makes love to mine / I think I’m a love angel.’

Let’s see, a group of outcasts dedicated to protecting a world that hates and fears them? If that doesn’t sound like an LGBTQ activist group, we don’t know what does! This simple premise, and powers that they are born with have meant the X-Men have resonated with LGBTQ+ audiences since they debuted in the 1960s. The shift from comics to film only continued that resonance. What queer person doesn’t identify, at least a little bit, with that moment in X2 when Iceman ‘comes out’ to his parents as a mutant? That was 2003. Fast forward to 2015 and Iceman is a canonically-out character.

The X-Men also gave us the first gay superhero to marry their partner (Northstar – a character who we could write a whole article on), and storylines like the Legacy Virus, which explored issues that have parallels in the LGBTQ+ community. They even have their own in-universe queer icon in the diva Dazzler. (We all stan a diva!)

Special recognition to Sir Ian McKellen and his portrayal of Magneto—a reminder that the LGBTQ+ community was persecuted in Nazi Germany too.

With her robot-building prowess, computer hacking skills, and cachet as the first person to use ‘google’ as a verb on TV, Willow Rosenberg is undoubtedly an icon. As both a powerful witch and a tech geek, Willow could claim a spot as both a sci-fi and a fantasy icon, but it was her groundbreaking (almost world-destroying) love for Tara that cements her spot on this list. This loving lesbian relationship was a powerful thing to see on TV, and it brought us some truly iconic scenes (when else have you seen mid-air, mid-musical-number cunnilingus?). Sadly, Alyson Hannigan’s most iconic moment as Willow, when the character goes Dark, came at the cost of that relationship falling prey to the ‘Bury Your Gays’ trope (and, debatably, ‘Women in Refrigerators’). But importantly, it was also the first time same-sex love between women was given the same world-shattering impact as that between heterosexuals.

🎶 I think this line’s mostly filler. 🎶

If you haven’t lived as a man who has metamorphosed into a woman and also somehow gained eternal youth are you even living? Orlando begins life as a poet and page in the court of Queen Elizabeth I, is appointed ambassador to Constantinople by King Charles II, undergoes a mysterious transformation, and then lives several lifetimes worth of adventure, art, and wide-ranging love affairs. That is iconic diva through and through. And, as Virginia Woolf herself had documented affairs with both women and men, Orlando can definitely be counted as an ‘own voices’ creation. In fact, the novel has been called ‘the longest and most charming (same-sex) love letter in literature.’ Pretty impressive for 1928!

Plus, the movie version is played by Tilda Swinton (iconic!).

Queer DNA helixes throughout Doctor Who, especially since its 2005 reboot by Russell T. Davies. Yes, recent series have seen both The Doctor and The Master shifting gender as they regenerate, but long before that, the series brought us voracious omnisexual space pirate Captain Jack and an interspecies same-sex relationship featuring a lesbian lizard and her Victorian companion (in the euphemism for a relationship sense, not the time-and-space-spanning-adventure sense).

But from the very first appearance of that body-morphing golden light, The Doctor has been teaching us that what truly matters is the person inside, that even though people transition into new entities, they also stay the same, and that we should respect the identities people identify with and listen to them when they tell us who they now are.

There’s also the fact that River Song has admitted she’s met every one of her spouse’s incarnations (making the Doctor bi as well)!

Style. Glamour. Razor-sharp wit. Agnes Moorehead’s portrayal of Endora, the witchy mother-in-law on the classic series Bewitched, is truly an iconic one. Endora is a powerful woman, one unafraid to use that power. Even if, as often as not, it’s to secure the finer things in immortality, like teleporting to Paris for luncheon or levitating herself a fresh martini. Every moment is flawlessly executed, the picture of old Hollywood magic (literally and figuratively). At the same time, she can be formidable when unleashing her wrath. And is it any wonder that Bewitched has been called ‘the Most Progressive Gay Series of Its Time’ with flamboyant characters like Endora and the camp-as-Christmas Uncle Arthur (played by Paul Lynde)? Endora teaches anyone who will watch that one need not sacrifice style when it comes to power, that all it takes to slay is a pointed one-liner . . .

. . . and that the only way to fly is with a glass of champagne.

This is the adorable, queer, asexual, power-couple that everyone needs right now (don’t @ us). Yes, Neil has stated that from the point-of-view of the text, the characters are not queer. The subtext, on the other hand, positively shouts it to the Heavens (and the Hells), and this frisson, this chemistry between the characters is made even more apparent in the Amazon miniseries. Besides, no one ever said one has to be queer to be a queer icon. As companions (there’s that word again) on Earth, each relatively isolated from their respective supernatural homelands, Aziraphale and Crowley become one another’s home, sole constants in the swiftly changing world (that they really should be doing something about) around them. If that’s not love, we don’t know what is.

Even Anathema noticed it, and she was justifiably preoccupied at the time. (Don’t make us bring the receipts.)

What to say about Ziggy Stardust, androgynous, bisexual deity of rock, and alter ego for David Bowie, that…androgynous, (nominally) bisexual deity of rock? Maybe the ‘alter ego’ line is what puts the fiction in the science-fiction concept album. In any case, Ziggy is luminous and transcendent, his very existence arguably doing some very heavy-lifting in shifting public perception in favour of LGBTQ+ rights when he first appeared in 1972. On stage, Bowie’s performance as Ziggy was glam, gender-bending, and utterly magnetic. High heels, extravagant make-up, kaleidoscopic dresses, the whole thing is EXTRA, and we are HERE FOR IT! Plus, he’s from space and (maybe?) saves the world with the power of rock music (the plot details are fuzzy), so there’s that.

Really, though, he reminds us of the babe.

The Muses have been singing about the wrath of Achilles for millennia, and that’s the gospel truth. Achilles spends a lot of his time in The Iliad being angry. He’s angry about not getting enough praise. He’s angry about not getting enough booty (HA!). He’s really angry about Menelaus taking Briseis away from him (she’s described as both his lover and a prize-of-war, because, well, war) but this anger becomes a full-on inferno of rage when Patroclus, his companion (YES IT’S A EUPHEMISM. THIS WORD IS ALWAYS A EUPHEMISM) is slain in battle. We’re talking proper wade-in-the-blood-of-your-enemies kinda stuff. Achilles is a nigh-on indestructible dynamo, and it’s a powerful thing to see an LGBTQ+ figure as a warrior. (We do like playing with swords!) Of course, this is all after Achilles tried to avoid the Trojan War entirely by disguising himself as a girl.

We’re not sure how convincing his disguise would have been.

10. Ariel and Ursula (The Little Mermaid)

Look at this list, isn’t it neat? It’s such a shame that it’s nearly* complete. The Little Mermaid has chimed with queer audiences since long before Disney’s 1989 theatrical release, and has its roots in same-sex desire. One object of Hans Christian Andersen’s affections, Edvard Collin, wrote, ‘I found myself unable to respond to this love, and this caused the author much suffering.’ (Now why does that sound familiar?) Since 1989, the mermaid has become a symbol to the trans community, with Ariel’s decision to take ownership of her body to better reflect her identity finding resonance with them. And how did Ariel change her body? Through the spells of fabulous sea-witch Ursula, famously based on the drag queen Divine.

*It really, really isn’t. We could go on for days.

This list is far from complete or comprehensive. In compiling it, we discussed Dorian Gray and Dumbledore, Captain Marvel and Vanyel Askevron, Elvira, Maleficent, John Constantine, Frank N. Furter, Eglantine Price, and so many more. LGBTQ+ people are everywhere, in every time period, so is it any wonder our icons span all reaches of time and space and beyond? Hopefully this list has reminded you of some favourites and introduced you to some you didn’t know before.

Now, if you’ll excuse us, we have divas to stan.

Jack looks to the past, the present and the future through his work in museum education. He also leads LGBTQ Tours of the V&A. He runs on coffee and a never-ending supply of enthusiasm and has a thing for old books. Follow him on Twitter @jackshoulder and Instagram @museumadventures

Trip is a writer, a PhD student and a researcher of all things pursuant to bargains, exchanges and compacts of a faery nature. It is inadvisable to attempt to make a deal with him. He has been, in the past, a reluctant cowboy, an Ivy League collegian, and an itinerant marketing professional. Mostly harmless. Twitter: @tripgaley