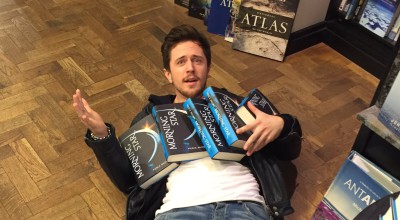 Posted on March 3, 2016 in Books with tags Events and exhibitions, Pierce Brown

Last week Pierce Brown hopped across the pond to celebrate the publication of the final book in the Red Rising Trilogy, Morning Star. Suffice to say, he caused a bit of a ruckus.

Here are our favourite moments from the tour.

1. When he tried to steal his own books from Waterstones Piccadilly

Pierce, you only had to ask.

Kirsty, we love you.

3. When an audience member asked for Mustang’s number and it turns out she’s inspired by his Mum…

Mustang is based on his mom. And the guy who asked the question was hoping it was a friend and he could have her number. #PierceOnTour

4. This fan finally getting their revenge on Pierce for that cliffhanger

Who can blame her?

Amazing Red Rising fan art from tonight. Shout if they're yours! #PierceOnTour pic.twitter.com/XoHqe3IT4q

Please teach us how to draw good Katherine.

We have a true Howler in our midst. No wolves were harmed in the making of this costume. #HowlerParty pic.twitter.com/1YvpJoLTuq

Anjuli from Waterstones Dorking, may we steal your wardrobe?

7. When we put Pierce Brown’s face on a cupcake and freaked him out a little…

We miss them already.

9. Goldsboro books knocking it out the galaxy with their window display

We're in love with our #morningstar window display waiting for @piercebrownofficial to arrive here for his signing. 23rd February – not to be missed! #piercebrown #redrising #goldenson

They literally blew up the galaxy.

10. These Howlers disturbing the peace

Sorry about the noise complaints Goldsboro.

11. Not to be outdone, Edinburgh also proved they have some lungs on them

12. When Pierce ascended Edinburgh Bookshop’s signing ladder and Patrick Ness and Guy Gavriel Kay decided to take him down a rung

There were some nerds in that audience.

14. And finally, the obligatory ‘Bye Felicia’

We think he’s a bit tired…

He came, he toured, he conquered. 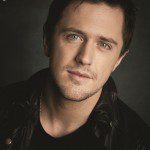