More fun than a rattlesnake in a barn dance brantub. – Reading Addicts

Thursday marks the publication of the next three stories in the ongoing adventures of Sister Thomas Josephine, the titular shootist (don’t call her a gunslinger!) of Hodder’s very own digital serial original, Nunslinger. Books 4 – 6 will be on sale at fine ebook retailers everywhere from midnight, 13 March… as will the first ebook omnibus edition of Nunslinger, collecting all six stories under one cover for the first time ever! 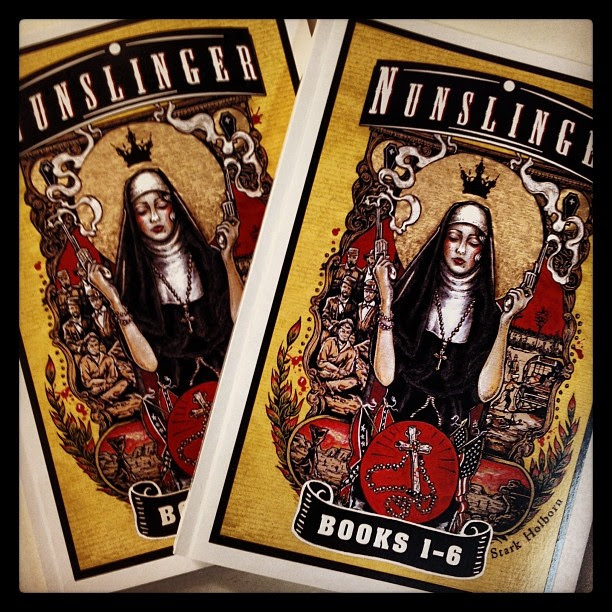 The year is 1864. Sister Thomas Josephine, an innocent Visitantine nun from St Louis, Missouri, is making her way west to the promise of a new life in Sacramento, California. When an attack on her wagon train leaves her stranded in the Nebraska Territory, Thomas Josephine finds her faith tested and her heart torn between Lt. Theodore F. Carthy, a man too beautiful to be true, and the mysterious grifter Abraham C. Muir.

Falsely accused of murder she goes on the run, all the while being hunted by a man who has become dangerously obsessed with her. Her journey will take her from the most forbidding mountain peaks to the hottest, most hostile desert on earth, from Nevada to Mexico to Texas, and will be tested in ways she could never imagine.

Nunslinger is the (almost) true tale of Sister Thomas Josephine, a woman whose desire to do good in the world leads her on an incredible adventure that pits her faith, her feelings and her very life against inhospitable elements, the armies of the North and South, and the most dangerous creature of all: man.

Nunslinger has it all – action, adventure, high mountain peaks and inhospitable deserts, rattlesnakes and grizzly bears. And through it all rides Sister Thomas Josephine (or Sister TJ, as she’s affectionately known ’round these parts), the utterly unforgettable character by mysterious stranger Stark Holborn. If you’re already following along, you’ll be delighted to know that books 4, 5, and 6 are stuffed full of the excitement you’ve come to expect.

And if this is your first taste of Nunslinger – well, you could hit the trails with a worse companion than Nunslinger: The First Omnibus.

We’ll be publishing the next three adventures in Sister TJ’s travels in June, and the final installments in September.