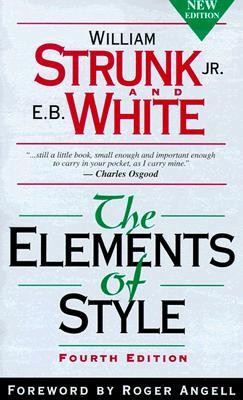 Posted on November 11, 2014 in Books with tags Nanododo, Writing Advice

In 1918, a Cornell professor named William Strunk, Jr., composed and privately published a short manual about writing. Years later, EB White, known best as the author of Charlotte’s Web, who had studied under Strunk at Cornell, remembered the little writing guide and revised it for publication. The first edition of The Elements of Style – known to its friends as Strunk & White – published in 1959 and sold about two million copies in that year alone.

I had the good fortune to be introduced to Strunk & White at age sixteen by a particularly good English teacher (thanks again, Mr. B!) who didn’t just make us read the book – he made us memorize its principles of composition.

Far and away the most important of these is omit needless words. It’s the best writing advice you’ll ever get. When we write, we write to impress, and often (especially when we’re sixteen) that means jamming as many polysyllabic monstrosities into our sentences as possible.

Clear writing is good writing, no matter what you’re writing.

Strunk & White is now in its fourth edition, although I personally prefer the third. The original 1918 edition is now in the public domain and can be read here. And remember, ‘our life is frittered away by detail. Simplify, simplify, simplify!’ Thoreau said that.