An affectionate look at monster movies before Jurassic Park 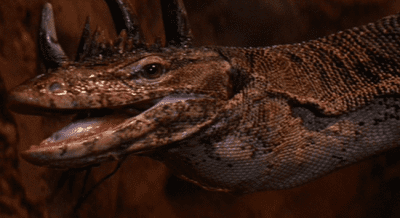 The original Jurassic Park signalled a new geological era of celluloid magic in 1993, with its eye-popping mix of practical effects and CGI (the latter is not used as much as you might think). But, pre-CGI, our monsters were not always so impressive (by that I mean, they were not all animated by Ray Harryhausen). Let’s take an affectionate look at the sometimes genuinely terrible lizards of the past: 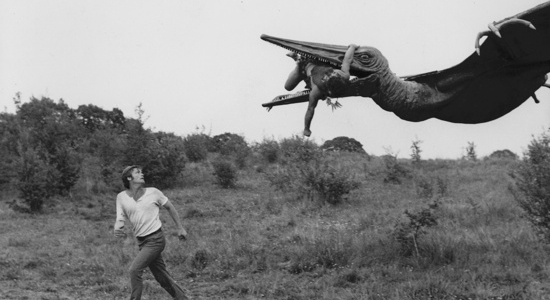 The lovingly-crafted dinos and hand-built miniature sets are a highlight, but a ludicrous pterodactyl glider and pantomime plesiosaur let the side down. There’s a lot of craftsmanship on show, however, and the puppets are terrific.

There’s also an anecdote about McClure punching through a wall during his audition. This may be complete bunk; but even if it’s untrue, it demands to be shared.

Doug popped up in a sequel, too – The People That Time Forgot – as Patrick Wayne (son of Jaaaarn) returns to the hidden island to rescue him. 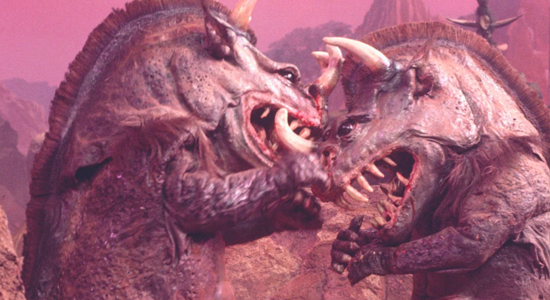 Connor followed up that Burroughs adaptation with another. Alongside deadly Doug McClure in the Victorian burrowing machine was Peter Cushing – never less than great value – in his bumbling professor mode.

Cushing actually shoos away a man-in-suit bird-beaked monster with an umbrella in this beguilingly daft effort. Watch out for the four-legged monster that’s clearly two blokes in a panto outfit, and Hammer enchantress Caroline Munro as an incongruously hot core-dweller. 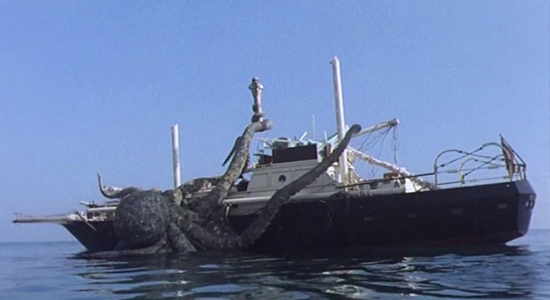 Connor and McClure’s final collaboration plunged us into underwater mayhem. Doug and The Onedin Line’s Peter Gilmore find Atlantis in a bathysphere-type contraption with a hole in the bottom… Just the perfect size for a plesiosaurus to stick its head through, you reckon? Spot on.

There’s an extraordinary scene where a giant octopus attacks a ship, drags the sailors on board below the waves to Atlantis… then deposits them on dry land, without any suggestion that they might have, y’know, drowned. The sound effect for the octopus seems to be a tape loop of raspberries and breaking wind – viewers can play along at home, easily.

This terrific romp features more fantastic miniature sets and puppet monsters, as Doug and the gang take on metal-helmeted fish men and a main baddie who models himself on Roxy Music-era Brian Eno. Watch out for the moment one of the crew is eaten, with a puppeteer clearly waggling his boot-clad fingers through the monster’s mouth to mimic kicking legs.

It’s as nuts as it sounds. Hand on heart, my favourite film when I was six years old. 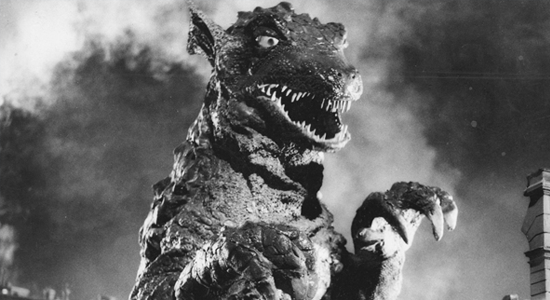 This British-made kaiju effort starring Bill Travers is all but forgotten, which is a shame. When a giant sea monster is captured off the coast of Ireland, a King Kong-sized mistake is made when the creature is transported back to London for display with a circus.

It turns out the giant reptile was just a nipper. Its mummy is a lot bigger. And has the ‘tude to go with it.

Eugene Lourie’s full colour man-in-suit epic owes a lot to Toho Studios’ Godzilla, of course, but it has a charm of its own. When Gorgo brings down the heat on a niftily-realised matchstick version of London, you’ll be cheering the big lass on. And (spoilers?) watch out for an unusually fluffy ending. Awww. 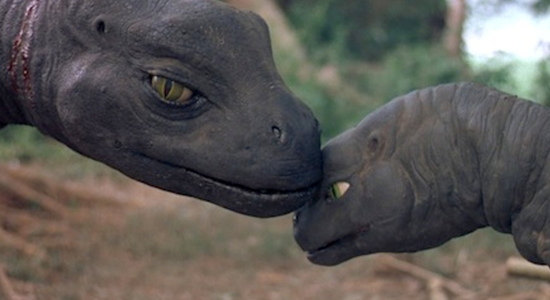 We’ve touched on this oddity before. Seann Young and William Katt discover a baby brontosaurus in Africa. The little one is a cute wee scamp – apart from its unsettlingly evil yellow eyes.

The effects are at the level of man-in-suit/puppet, and the final rampage is good for a giggle (if extremely violent for a children’s movie).

The nastiest monster involved might well be Patrick McGoohan, in a typically malevolent turn. As in Gorgo, though, we discover that it really doesn’t pay to cheese off a mummy monster. 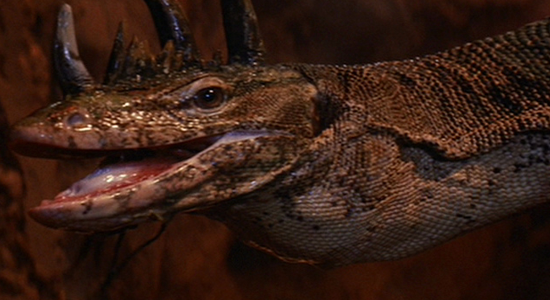 Irwin Allen’s garish adaptation of Conan Doyle’s Professor Challenger classic hit upon the dubious plan of bringing dinosaurs to the big screen in the shape of… real reptiles with bits stuck on them.

Oh lord, there’s even a “fight” between a pair of beasties… You daren’t look, for all the wrong reasons.

At one point, a ‘tyrannosaurus rex’ menaces our heroes. Any budding dinosaur fan could have corrected Claude Raine’s Prof Challenger in his taxonomic assessment. ‘That’s not a T-Rex, mate… that’s a lizard with a couple of horns glued onto its head.’

Watch out for a “giant spider” which I really hope was not dyed green.