At this year’s London Book Fair I went along to the panel on Writing Fantasy and Horror for Young Adults. In a discussion chaired by Total Film magazine’s acting editor Rosie Fletcher, fantasy authors Sally Green (Half Bad), Joshua Winning (The Sentinel Trilogy), Liz de Jäger (Banished), Tom Huddlestone (The Waking World) and Zoe Marriott (The Swan Kingdom) explored the complexities of writing for young adults and why teen issues go hand in hand with darkly magical stories. Here’s what I learnt: 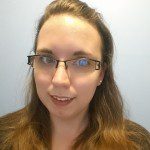 Sarah is a Jedi. In her spare time she blogs about books, writes YA and is the literature contributor for FLiCKonline. Currently completing an MA Professional writing in Falmouth, she uses the force to stay upright on her surfboard. Cats rule.