Posted on February 12, 2015 in Fun Stuff with tags Animals

Llamas are the best. Alpacas are also the best. The scientific name for llamas is, I kid you not, Lama glama. (Science, you’re not even trying anymore.) But that’s the last fact in this post. Because Thursday is for llamas, not knowledge!

So, here are all of the llamas you will need for today.

Do you like handsome men, fashion and llamas? This is the fashion shoot for you.

How about llamas covered in bees? (Cute but confusing.) 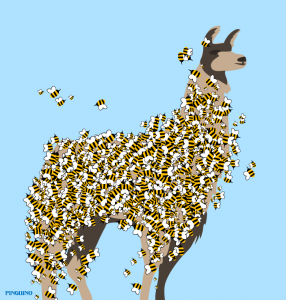 Here’s a video about a dancing llama which you need to watch immediately.

If three minutes is too much to commit to a llama song, try 27 seconds:

Then watch this llama playing with tiny lambs and then pronking. (Yes, that’s what it’s called. Goats do it, too.*) (Pronking begins at the 1.40 mark.)

You’ve seen this llama before (when we spent a morning on Twitter fancasting Red Rising with llamas; this one was Sevro) but he’s my faaavourite. I call him Disaster Llama. 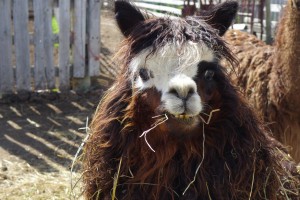 You’ve seen The Emperor’s New Groove, aka the best Disney film ever, right? Here’s a taste:

There are also llamas.

There was a llama videogame! It was called Llamatron. 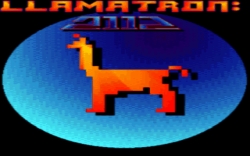 It’s almost Valentine’s Day, so you definitely need to look at these photos of adorable baby llamas. You can look at them on non-Valentine’s-Day-adjacent days, too.

Just remember: at the end of the day, llamas. 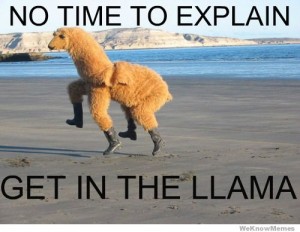