Kingdom of the Feared foil FAQ’s

What is the first edition foil?

For the first UK print run of Kingdom of the Feared hardback, we have created a beautiful foil on the board design, which will be printed on the case of each book, beneath the dust jacket. 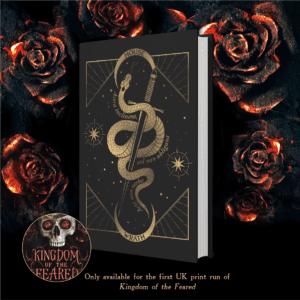 What happens after the first print run of foil sells out?

The second print run of the book (also known as the second edition) and any subsequent reprints and editions after that will still be beautiful hardback editions, but beneath the dust jacket there will be no foil design on the board.

How can I ensure I get one?

Stock is limited, so pre-order your copy today to guarantee getting one!

Where can I get a hidden cover edition from?

Links to purchase The Kingdom of the Feared from UK retailers can be found here:

How expensive are the hidden cover editions?

The recommended retail price (RRP) for all editions of The Kingdom of the Feared  is £16.99, though some retailers may be offering discounts. Only the first print run will feature the foil design, but the price will be the same as later editions.

What is the ISBN for the UK hardback edition of The Kingdom of the Feared?

Are there any other special editions of The Kingdom of the Feared available?
Yes! Waterstones are offering a sprayed edge edition with exclusive endpapers. The Waterstones special edition will also include the Hodder foil design. Check online for availability and further details:

Can I buy any of these editions if I’m outside the UK?
You can order to your country from UK retailers, but may have to pay increased shipping charges for any international shipping or customs. We apologise for any disappointment, but we are only able to print the hidden covers in the UK.

Is there anything else I should know?

We can’t reprint any more first edition foil designs after the first print run, so when they’re gone, they’re gone! We recommend pre-ordering early to avoid disappointment, as once they’re sold out there will only be second edition hardbacks available, which will not have the foil design.

Will any UK editions of Kingdom of the Feared have bonus content?

No unfortunately we are not able to offer any bonus content (from Wrath’s POV or another’s) for any UK editions of Kingdom of the Feared. But we hope the other extra finishes up for grabs on the first UK hardback print run and with the Waterstones special edition will make up for this!

Who should I speak to if I have a problem?

All retailers are responsible for ensuring they fulfil their pre-orders. Neither Hodderscape nor Kerri Maniscalco accept any liability for any delay or failure by a retailer to fulfil any orders or to supply the correct edition.

If you have any questions or problems, please contact the retailer you ordered from directly, or for anything else, the team at Hodderscape will try to help at email.