Jurassic Park Past: My Time with Michael Crichton 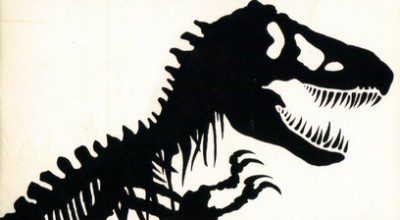 Editor Oliver Johnson published Jurassic Park at the very beginning of his career. Today he looks back at the publication of one of the biggest-selling books of the 1990s, and the incredible London premiere of the 1993 film.

1990 was the high-water mark of my career. I started a new job and immediately enjoyed two masterstrokes of luck. The first was the acquisition of John Grisham’s The Firm, and the second was the arrival of a novel by Michael Crichton which we had bought with our sister house, Knopf in the US. Rumour had it that it was something to do with genetically-engineered dinosaurs. I knew Michael’s work through two science fiction novels, The Andromeda Strain and Sphere, so the kernel of this new idea didn’t surprise me. But his recent publishing history had been chequered; he had the most eclectic mind and imagination  of anyone I ever knew and it seemed he wrote a different type of book or movie script every time. As well as SF, he’d written non-fiction on art, thrillers, an alternative history, a heist novel and movie, his popular books on medicine (which sowed the seeds of ER) and created the virtual theme park Westworld. In 1983 he had written one of the first popular books on computer programming. It’s difficult to imagine now, but in the early 90s tech consisted of pens, paper, typewriters, desk phones, faxes and photocopying. The word ‘email’ only came into use in 93 and, unsurprisingly, the first person I received an email from was Michael himself. 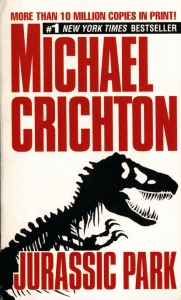 His last book before Jurassic Park had been Travels, an absorbing but eccentric autobiographical work. So when the sizeable Jurassic Park manuscript thumped down on my desk like the footstep of Rexy herself, I had little idea that this book was about to make publishing and movie history. Or just how famous Michael Crichton (who was already very well known) was about to become. A scant four years later Michael had the unique triple distinction of being simultaneously the creator of the world’s top grossing film (Jurassic Park), TV show (ER) and novel (Disclosure).

Ignorant of this future tidal wave of success, I set to work on producing Jurassic Park for the UK market. The first thing to address was a selling line that conveyed the sheer awesomeness of the concept. A friend of mine was creative director of the ad agency J Walter Thompson. I pitched him the concept over a game of tennis, he volleyed the shout line back: ‘In the future there will be dinosaurs!’ I still account that the best shout line of my career. Onto the jacket: my idea was to convey the exciting idea of dinosaurs being alive today. Cue several unexciting jacket roughs showing dinosaurs chasing ant-people through a jungle. Legendary art director Chip Kidd in New York had other ideas. His jacket was the famous T Rex skeleton which has been adopted in one form or another on every Jurassic book, film, and scrap of merchandise since. The genius of the design was apparent even to us Brits and we quickly adopted it. But there was to be a sting in the tail — and one that as far as I’m aware has never been repeated in publishing history. The artwork on the book became so iconic that Universal Pictures licensed it from Knopf for their film poster art and for the in-film merchandising. When it came to produce our film tie-in jacket we found ourselves having to buy back our own artwork from Universal at considerable cost.

The book was already a huge success before the movie came along, as famous a popular novel as any era-defining book of its time. In the run up to the film the column inches of reviews and features just kept coming, until Michael seemed to get rather fed up with his creation and politely declined to receive any more.

Michael travelled to the UK for the movie premiere and I got to meet him for the first and last time. Amazingly tall, lean, ascetic, snappily dressed, urbane, witty and fiercely intelligent, he was also extremely loyal and considerate to those who worked for him.  We threw a party for him at a swank private dining club where it rained champagne and fancy hors d’ouevres. Oh, and there was the habitual fug of party cigarette smoke. Eveyone smoked in those days. Michael didn’t eat or drink anything: his one indulgence that evening was a solitary cigarette he bummed off of me. Such was his rigour; the rigour he extended to his writing regime and all his other pursuits.

The royal premiere of the film with Princess Di in attendance (Newscaster: ‘The Combination of Dinosaurs and Princess Di = Dynamite!’) with its red carpet, barriers, screaming fans and general hullabaloo was the single most glittering event I’ve ever been to. Michael was at the centre of it with Spielberg and Richard Attenborough — the other stars of the film were then relatively unknown. The ground-breaking special effects of the movie held the Empire Leicester Square in terrified thrall. Afterwards, shaking a bit, I lit, of course, a calming cigarette in the foyer. ‘Got a light?’ came a voice and I turned and there was legendary couturier Bruce Oldfield, probably the most famous designer of his day, and who had no doubt dressed Princess Di for that evening. 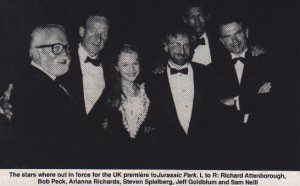 After, a fleet of limos wafted us to the Natural History Museum. In homage to the film, the gothic entrance was bedecked with palm fronds through which we had to force our way, to spill out right in front of the looming skeleton of Dippy the Diplodocus. Spielberg, Michael and the cast were assembled under its massive frame, meeting and greeting. I pressed the flesh of film royalty, then, in a daze, was ushered to a table in one of the side corridors. It was done out like a Pacific grotto, with more fronds, conch shells, fake pearls, and mirrors to give the effect of pooled water and sand and pebbles, underlit like a subaquatic lair. ‘Dinosaur food’ was promised but I can’t remember what was actually served, probably a brontosaurus steak with a shrimp side. After the food and some powerful punch the glittering guests were free to roam the deserted dinosaur halls – it was an enchanted evening I’ll never forget.

More dinosaur movies were to come, another Jurassic book, The Lost World, though Michael had become a little tired of his prehistoric pals by then. His mind was on new projects: Disclosure, Airframe, and his time-shift novel, Timeline. He had become interested in computer game design and so, another first, the Timeline prototype was the first video game I ever played.   The years went past and he moved to Harper Collins for his last books. We never met again, though I will never forget those years that, first through the page and then on the silver screen, his dinosaurs came alive.

One comment on “Jurassic Park Past: My Time with Michael Crichton”