Posted on March 3, 2015 in Film with tags Film Review, Horror

Any horror fan knows that having sex in a horror film usually leads to bad things.

The young lovers who get frisky in the back of their car as a serial killer watches on. The couple who take a break from the slaughter for some heavy petting only to get mowed down in their prime. The girl who loses her virginity to a vampire and in doing so takes his soul and turns him evil. Okay, that’s not a horror film but I couldn’t avoid a Buffy reference.

Halloween. A Nightmare on Elm Street. Friday 13th. All films where psycho killers dole out a bit of sex education. In the words of Coach Carr from Mean Girls: ‘Don’t have sex, you may get pregnant and die’. In between that, you may also be run down by a crazed murderer. It Follows takes this horror story trope for a spin.

Something’s going around the teens of suburban Detroit. There’s a Sexually Transmitted Demon, the titular ‘It’, on the loose, passing from partner to partner. Once contracted, it stalks the infected at an unrelenting pace, neither sleeping nor eating until it has claimed and killed them. It can take the form of any person but, if it wasn’t already enough of a buzz kill, it seems to have a preference for naked parents. 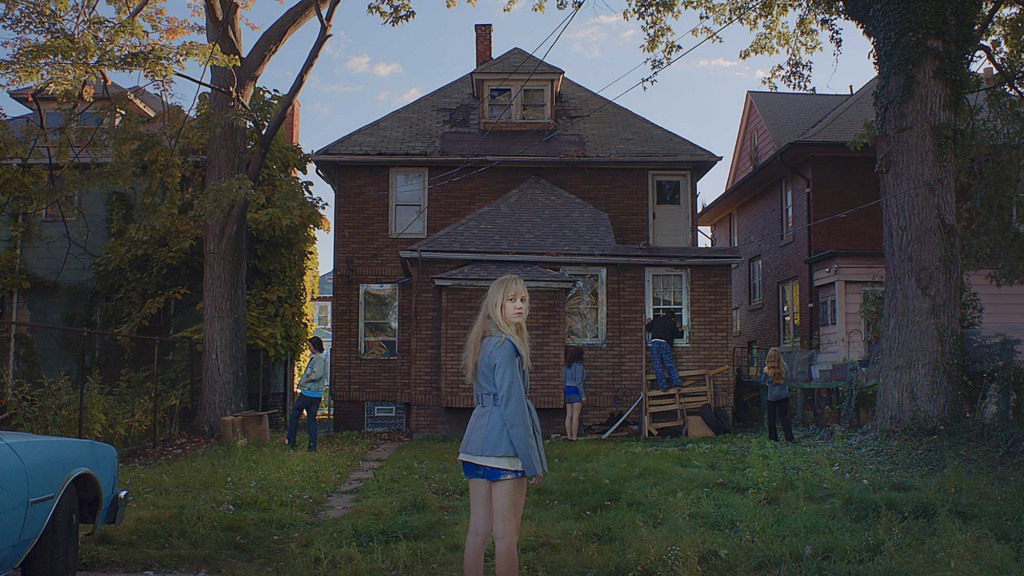 Here the precautionary tale endeth because a trip to the clinic won’t cure this, the only cure is more sex. And you can’t just pass it along to an unwitting victim because if it kills them, it’s heading straight back to you. So you need to explain to the person you’ve slept with that they are now being followed by a protean, malignant force intent on bringing them to a grisly end. Imagine that morning after conversation.

The film’s lead character Jay contracts this STD after a tryst with a guy called Hugh whom she’s been dating for a while. Unknown to her, Hugh has a nasty little secret. Suffice to say Hugh is not a stand up guy, and he hot foots it straight after he has explained the rules to her. Jay then spends the rest of the film trying to escape this demon.

The film doesn’t punish Jay for having sex, if she’s punished for anything it’s for her desire to stay within her safe suburban neighbourhood. Because, though it is absolutely terrifying and I may have clawed by fellow cinema-goer’s arm, this is a demon that hunts down its prey by walking. It can be tricksy, but ultimately it’s pretty slow. If Jay were to go to say Timbuktu, or even just Canada, she would be able to avoid it for a while.

In a moment of post-coital (but pre-sorry-I-gave-you-a-demon-al) bliss Jay recounts her teenage daydream of driving around aimlessly into the distance and having ‘some sort of freedom’. Now she’s old enough to go travelling, but she’s staying put – even when staying put could kill her. As she tries to escape the creature she continuously returns home, running in circles. Though that teenage dream of road trips and nomadism might save her, she never contemplates it as a viable means of escape. Jay is actually pretty sensible. Though in the short term running around in circles might not have been the best idea, realising that running away from your demons won’t solve your problems is pretty mature.

With its John Carpenter-esque soundtrack and jump cuts, It Follows pays homage to the great slashers of the 80s, re-creating classic set-pieces and riffing off the familiar pattern of sex and punishment. But aside from the blaring synths it’s also a quiet film, often baring closer resemblance in to Virgin Suicides than it does Halloween. In fact, the action scenes, particularly the final showdown, are where it shows any weakness at all. It’s the quiet out of focus moments where a lazy day at the beach or a stroll down a tree-lined avenue is overshadowed by a figure moving in the background, where the film builds its dread and claims its place as a horror masterpiece. I left the cinema looking over my shoulder.