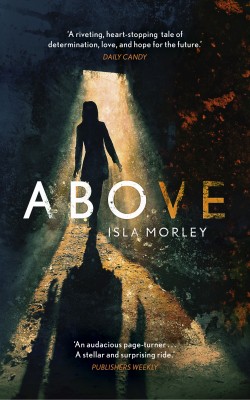 Posted on May 7, 2014 in Books with tags Hodderscape Review Project, Isla Morley

NOTHING IS AS IT SEEMS…

Blythe, a sixteen-year-old Kansas schoolgirl is abducted and kept in an abandoned silo by a survivalist, who is convinced that the world is about to end.
Struggling to survive, crushed by loneliness and the terrifying madness of her captor, Blythe resists the temptation to give up.

Nothing, however, prepares her for the burden of having to raise a child in confinement.

Just when Blythe starts to believe that she may be confined to the silo for life, their lives are ambushed by one event that is at once promising and devastating…

THINK YOU KNOW WHAT’S GOING TO HAPPEN? YOU REALLY DON’T…

Riveting and unforgettable, this is a beautifully written and compelling tale of survival, reinvention, and hope.

In the essay below, Isla explores the role that doomsday prophets – be they street-corner preachers or novelists – play in our understanding of the end times.

I don’t know about you but I like my doomsday prophets on street corners.  With their bullhorns and homemade signs with the dripping red lettering, I want them out there in the noonday sun making feverish pronouncements that world is coming to an end.  I also like my doomsday prophets stereotypical: having hygiene issues, for example, and being bad spellers, having a thing for hyperbole.  It makes it easier to file what they say with the reports of alien abductions and Elvis sightings.

What doesn’t sit well is when doomsdayers show up in their ties and spectacles, and speak in measured tones at, say, the United Nations.   It is one thing when a crazy bearded guy tells us we’re doomed, quite another when a respected professor from Princeton does.  In the parlance of scientists, specifically Michael Oppenheimer, “We’re all sitting ducks.”  According to the UN Report on Climate Change which he co-authored, we have it coming to us in spades.  This report came out at the end of March, when I was still deciding how best to proceed after the Federal Energy Regulatory Commission in the US dropped its bombshell two weeks earlier.  The FERC warned that a catastrophic coast-to-coast blackout lasting days or weeks, possibly months, could occur if nine of the 55,000 electric-transmission substations were knocked out by saboteurs.  This is particularly chilling when taking into account that last April snipers (still at-large) fired 100 rounds and thereby disabled a substation that supplies electricity to Silicon Valley.  And yet, of those nine critical substations, none are secured a year later.  Excuse my French, but FERC me!

The Sitting Ducks Report inspires even less confidence. In it, the levels of risk of a global catastrophe are categorized with colors and obvious names for the benefit of those readers who might still be in Kindergarten.  “High” in fire-engines-blazing-down-on-you red was the apex in the report released in 2007.  This time, an additional risk level has been added.  In Crayola-purple is “Very High.”  This is akin to the street corner prophet having his sign read: The End is Very Nigh.  For the next report, I hope the scientists consult a writer, lest we end up with a “Very Very High.”  Not to sound flippant, but “Eschatological” has a nice ring to it.

The scientists have the bullhorns now.  The professors carry the placards.  Their message is broadcast at heavily trafficked intersections on the internet.  And as with their crazy, bearded counterparts, there is a sense that people aren’t paying all that much attention.  As the forecast darkens, we feel at once an obligation to do more (bicycle, recycle, flush less) and a contrary urge to sit on the couch and watch re-runs of The Walking Dead.  We get closer and closer to our apocalypse, and our appetite for dystopian stories gets greater.  Why?  Maybe we have been listening to the prophets and are drawn to these stories because they ask a fundamental question about human nature that the scientists haven’t.  The question we want answered is not when the world is going to end, or even how it is going to end.  What we want to know is this: what are we like when things are at their worst?

Most of us provide for our families, are hospitable to our neighbors and charitable to those in need—but that’s when the weather’s nice.  Are we inclined to be generous and selfless when we are in peril, or when our loved ones are in peril?  Dystopian fiction explores the question of whether there are limits to our goodness, and even our belief in goodness.  Some would propose that our capacity for goodness goes only so far.  You will know who they are by their arsenals.  And then there are those of us who believe our capacity for goodness is directly proportional to despair.  The greater the despair we experience, the further our reach for Good.

Predictions of end times are best left to street preachers and scientists.  Left to the writers and poets and songwriters is the job of imagining the darkness and the hope that dispels it.