Posted on February 18, 2015 in Television with tags

We spoke to Esther Smith, who plays Suze in ITV’s post-apocalyptic romantic comedy Cockroaches, about life on set, researching her role and what’s so funny about an apocalypse anyway. 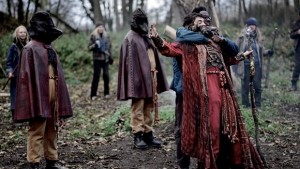 What’s the weirdest thing about working on a post-apocalyptic set?

Probably being in a 4 x 4 with Robert Bathurst fully bearded and wigged like Gandalf and not realising it was him for a good 40 mins. Things like that, seeing actors and comedians day to day muddied up, in various states of disarray. Caroline Quentin’s corn rows were a particular highlight. In terms of our location and surroundings the design team and art department did an amazing job of building an almost Hook-esque camp with tree houses and little makeshift chalets. When I was younger I was obsessed with the film The Swiss Family Robinson because I always liked the idea of building a fun house in a tree with lots of different contraptions to make things work. So this was like a mini version of that. It was like being in a playground. A playground with some of your favourite comedians. It was like the best, most surreal dream. 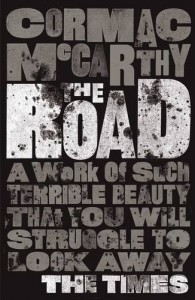 Were there any films or books you used to research your role?

To research for the role and get myself into the post apocalyptic vibe, I read (and watched) Cormac
McCarthy’s The Road. Godzilla happened to be out around the time we were filming and preparing, so that seemed like a good thing to go and see. Anything involving the world being put into dire straits was on my radar at that time. I saw piece of theatre called Mr Burns at the Almeida in London, about survivors after an apocalypse entertaining themselves by trying to remember a specific Simpsons episode, then we see how that story evolves through time. It was amazing. 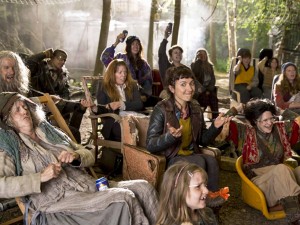 What so funny about an apocalypse anyway?

So yes in reality, the idea of an apocalypse isn’t a laugh out loud kind of situation. But I think for this project, Freddy had looked at the ‘what if’ scenario of surviving a situation, and some of the absurdities within that. How, as people with all our varying quirks would work together in a situation to survive, and how those quirks would reveal themselves in heightened and strained situations. I think the humour comes from human nature rather than the situation. If people survived an apocalypse I’m sure we’d still do pretty daft things. In fact I’d guarantee it.