Posted on March 10, 2016 in Books, Film, Fun Stuff with tags Daniel Polansky, Those Above, Those Below

Those Below, the second half of Daniel Polansky’s incredible epic duology, The Empty Throne, publishes today! Given that Those Above and Those Below tell a story about, essentially, the decline and fall of the elvish empire, we figured there was no better way to celebrate than to highlight five elves we’re personally very fond of. Well, four elves we’re fond of and one elf we have some questions about.

Because we love you, we have hand-illustrated this post. Lucky you! 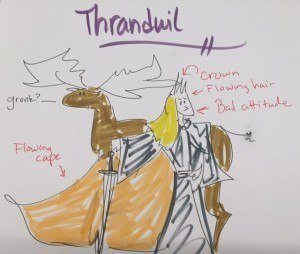 Obviously no list of elves could be complete without including an elf of Middle Earth. I could write about Legolas, the hottest of the elves, or Elrond, the most useful of the elves. Or Galadriel, the secret true badass of the elves. But do any of them ride a war-moose? DO THEY? No. Therefore the best elf in all of Middle Earth is Thranduil, father of Legolas, rider of a GIGANTIC FREAKING MOOSE WTF. He has a flair for the dramatic, weird scars, a bad attitude and the most ridiculous crown. And an even more ridiculous throne. Also: moose. (I am obviously talking about the movie version of Thranduil.) (You might try to point out here that he rides an elk in the films, not a moose, but you are wrong. MOOSE.) 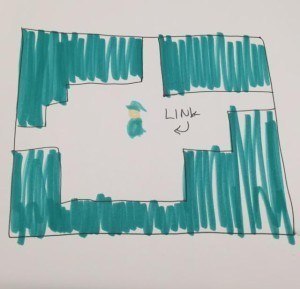 Okay, in all honesty, The Legend of Zelda always kind of disappointed me. Like, why wasn’t it about an awesome lady warrior named Zelda? Why is the game actually about this guy in a pointy hat who rescues boring ol’ Zelda? Anyway, apparently Link is an elf so he gets a place on this list. I’m not convinced he deserves it, though. 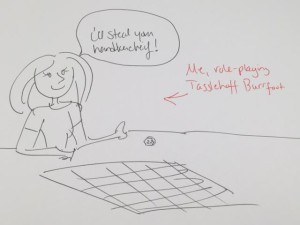 Obviously my favourite Dragonlance character is Rasitlin, because he is the best, but Tanis is the main character/defacto leader of the group in Dragons of Autumn Twilight, so he gets the nod here. That said, my abiding memories of DoAT centre around Raistlin being awesome, Goldmoon being a damsel in distress, Tasslehoff being hilarious, and Tanis being kind of dull. But leader characters are often pretty dull, aren’t they? Also, in the interest of full disclosure, my abiding memory of DoAT comes from the time I played the RPG with a group of friends. I was Tasslehoff, because I’m always the short, chaotic, pain-in-the-butt character. 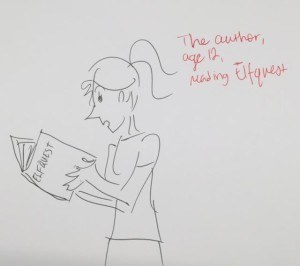 The elves in Elfquest are descended from aliens, I guess? So: there are two tribes, the Wolfriders and the Sun Folk, and they intermingle and ride wolves and are telepathic or telekinetic or something. Anyway, there is lots of elf-sex, which I found very racy when I was like 12, and they ride wolves which is always awesome, and my favourite was Leetah, the leader of the Sun Folk, mostly because she had awesome hair. I mean, I was 12. 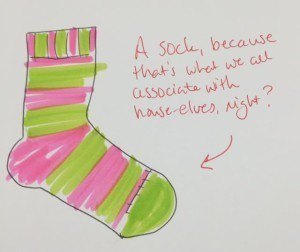 In total fairness, JK Rowling was doing something really interesting when she introduced house-elves to the Harry Potter mythology; the way the wizarding world unthinkingly relies on their efforts is pretty appalling, and Hermione’s well-meaning response is… well, I’m not sure it’s that helpful, but it’s what makes her such a legitimately compelling character. But the house-elf plotlines tended to go in circles, and Dobby was annoying (though not as annoying as on film!) and all his Hogworts house-elf friends were poorly developed. (Remember the one with the drinking problem?)  But there was a light at the end of the house-elf tunnel: Kreacher was hilarious dolorous and he betrayed Sirius and Harry had to learn that very important coming-of-age lesson, How to Forgive, because of him. And most importantly, he wandered around talking to himself and complaining about the protagonists while in earshot of them, which is awesome. Fifty points to Kreacher.