How we organise our shelves

Posted on April 13, 2015 in Books, Fun Stuff with tags Life in Publishing

We’ve just moved offices and our shelves are looking pretty fancy. Tomorrow we’ll give you a full tour of our new lair, but for now we’re sharing a few home shelfies. We rounded up some of our authors and friends and asked them to take shelfies and show us around their collections. 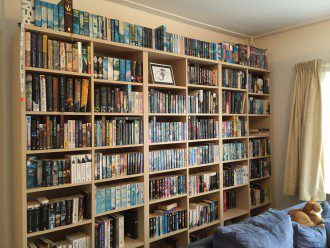 These are my fantasy shelves. Well, the four last boxes are SF, and YA fantasy is upstairs in the YA case, not to mention the fantasy that is in my To Be Read case, but for all practical purposes, these are my fantasy shelves. They represent twenty years of fantasy reading and book collecting. There is a similar amount of bookshelves upstairs filled with historical fiction, crime, SF, YA and more, but these books are the ones that say most about me as a reader. They’re watched over by Onyx, the silver-black dragon, who guards my books. 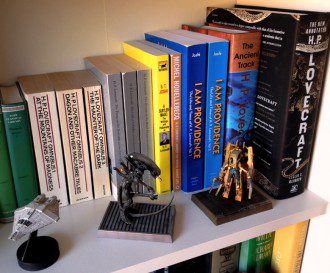 This is my Lovecraft collection. Three different versions of the complete works. The well-thumbed edition I had as a kid, the revised Penguin Classics edition, and Leslie Klinger’s superb annotated volume. 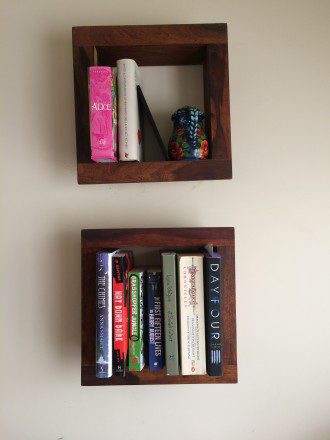 I keep the books I’m reading or meant to be reading or reviewing in either of these two box shelves by my desk. They give me a sense of order and somehow makes it look like everything is very tidy and sparse in my house!

The two books on the top box (I now see that it’s not straight!) are a really pretty collection of quotes and images from Alice in Wonderland, and a short story anthology called Angela Carter’s Wayward Girls & Wicked Women – both books I look into occasionally, to be reminded of different things. Plus, my daughter is fascinated by the Alice collection, with it’s multiple sorts of illustrations for the same classic story so it’s helpful to have at hand when she decides she must have it right away.

My Kindle is up there too, which is a bit of a cheat since it usually lives in my handbag. But it has on it Maria Dahvana Headley’s Magonia and Frances Hardinge’s The Lie Tree, both of which I’m going to review. I’m really looking forward to reading both in the next couple of weeks, and to interview both writers too.

In the bottom box are paper books I’m getting to, which I still prefer over e-copies (what can I say, I haven’t got over that yet!). They are –

The Chimes by Anna Smaill – in the absence of both memory and writing is music’ – hell yes!

Way Down Dark by JP Smythe – not just am I mad excited about this book itself, but I’m really excited to talk to James about it on my podcast too – he’s a really fun person to interview.

Grasshopper Jungle by Andrew Smith – thanks to the Kitschies, I’ve discovered Andrew Smith & am actually recording with him this week.

The First Fifteen Lives of Harry August by Clare North – I am so embarrassingly late with this – have heard nothing but amazing things about Clare North so I grabbed this a few weeks ago when I was in Lahore and saw it in a local bookstore there.

The Buried Giant by Kazuo Ishiguro – I’m reviewing this for our local lit supplement – it’s a strange one & it’s taking me much too long to finish.

The Dragonlance Chronicles by Margaret Weis & Tracy Hickman – I’m part of a Dragonlance reread over on Tor.com so I barely go 4 days without reading a few chapters of the Chronicles. My sister moved away with all our childhood copies, so I bought this off a local used books website. It says £1 on the front page in pencil. Travesty.) 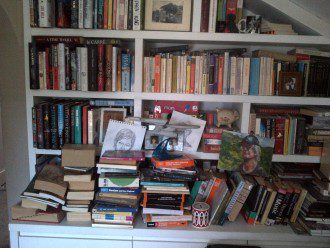 Here is my home shelf. Triple banked and piled high with books, geekmos and moth killers (I’m not Zen about moths).There is a great kid’s picture book about a boy being told to clear up his room by his mum. He gives all his junk to his gullible younger brother. Older kid ends up with spanking sleek minimalist bedroom, younger kid ends up with a jungle of double junk in which he can barely move. This is how I feel now my old office shelf junk has had to be piled up on my home shelf. 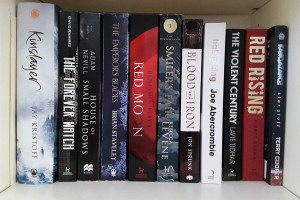 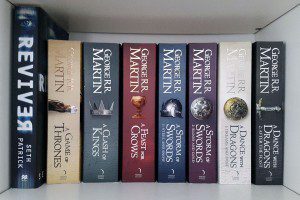 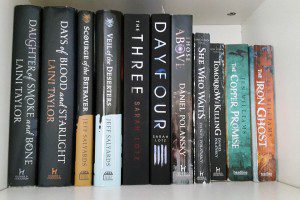 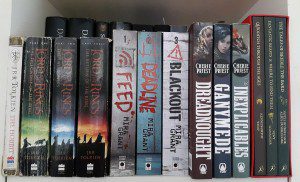 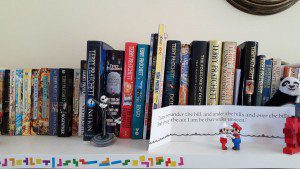 Space is the name of the game with my bookshelves, so I have to stack all my books two-deep. I try to keep books in a series together (Like my Low Town books and Song of Ice and Fire series), but ultimately I stack them in height order so there’s more space for more books!

I also have a long shelf dedicated to Terry Pratchett’s books – this is the geek centerpiece of the living room and takes pride of place.

When Anne asked me if I’d like to participate in the Shelfies series, I couldn’t help but think that my contribution would end up being a bit disappointing. You see, I’ve been moving so often these past couple of years that the majority of my library is either in storage, in boxes somewhere, or has been replaced with eBooks.

Sharing a photo of a Kindle would not an interesting article make.

My books are spread pretty much all over the house, piled up beside my bed, and so forth. However, I do have a small area dedicated to my books, so I’ll share that: 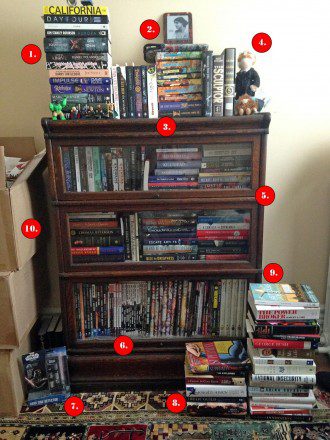 Let me walk you through it… 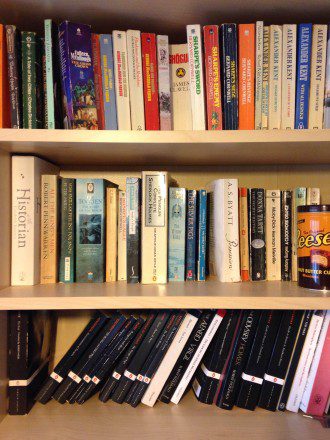 The top shelf here comes from a box of books that my parents had kept in storage for twenty years. We found it a couple of years ago when we were digging out my old Lego for my sons, a time capsule of what I was reading in my teens (if you’re wondering about the Lego, you can see some of it here). A Tale of Two Cities from 8th Grade, Wuthering Heights in 11th and Yevgeny Zamyatin’s pioneering Soviet sci-fi dystopia We, which I studied for my term paper in Senior English. To the right you can see my holy trinity of early historical fiction – Flashman, Sharpe and Alexander Kent’s Richard Bolitho series. They were so fundamental, it was almost inevitable that the first book I wrote would be a cross between Flashman and Bolitho, with a bit of period detail from Sharpe thrown in.

The middle shelf is my Hero shelf – a partial collection of the books I badly wish I’d written. What they all have in common is that I vividly remember how I felt the first time I read each one: the flesh-trembling imperative to find out what happens, spiced with the sadness of knowing it has to end. A lot of my novels are not-so-subtle attempts to emulate these books. Lily’s untrustworthy circle of university friends in The Orpheus Descent sort-of imagines what the group from The Secret History might have been like ten years out of college. I wrote the historical detective story of The Book of Secrets straight after reading The Historian. Mood-wise, I’m often trying to recreate the slow-release bafflement of reading a John le Carre novel, and I got a few nods to Miss Smilla’s Feeling for Snow into the snowy wastes of Zodiac Station. The Silver Pigs is actually a copy that my father passed on to me after a colleague loaned it to him (obviously, I never returned it). It was the first historical crime story I’d read, and totally captivated me. The Mosaic of Shadows started out as my attempt to ‘do’ Falco in Byzantium though it changed quite a lot in the writing.   With all the amazing things that have happened to me in my career, the one that still makes me pinch myself is that I have the same editor as Lindsey Davis (and, for that matter, Alexander Kent).

The lowest shelf in the picture is, as you can see, a collection of Penguin Classics – mostly ancient Greek authors that I used for The Orpheus Descent and Lost Temple (though Victor Hugo also seems to have sneaked in). Some of them have been with me for a while. The Aeneid and the Odyssey go back to high school, while the Iliad is a copy I bought in 1998 while staying in the Greek citadel of Monemvasia with my future wife.

The bookshelf is a Billy bookcase from IKEA, modded a little to squeeze in more shelves (Disclaimer: IKEA does not recommend you do this). Douglas Adams once said that the printed book is like sharks: it will survive for ever, because it is the best it can be at doing what it does. The Billy is the bookshelf equivalent. 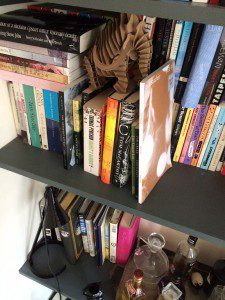 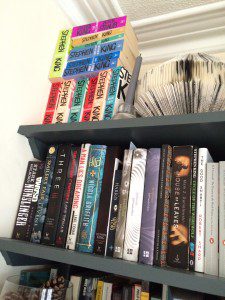 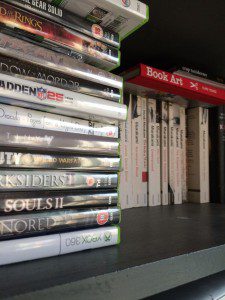 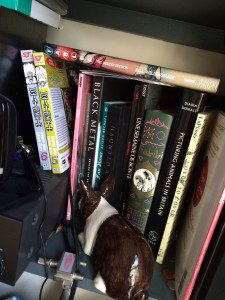 There’s a stereotype about book lovers: apparently we love sorting our shelves, arranging things in order (not colour order, of course), and gazing upon our pristine shelves. I applaud all these things. I however, do not uphold them. I could blame my London-sized appartment, the fact that 90% of my ‘collection’ still lives at home with my Mum, or the fact that my shelves are a weird amalgamation of mine and the old ball and chain’s books – but, I’m just messy. Above is a small catalogue of my crimes against books. Please note, Crap Taxidermy filed carefully on top of Murakami, my Tidhars separated by a Lotz and a Levene, an ‘oversized’ area sandwiched between some speakers. I have no shame.

Tell us how you organise your sehlves!