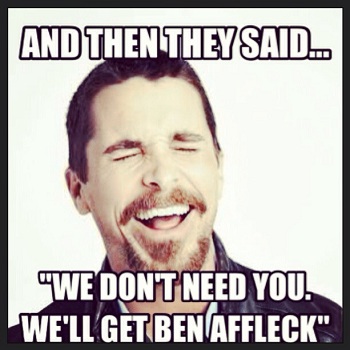 Okay guys, I’m going to open up a can of worms up in here. Ben Affleck as Batman, let’s just say it was an unconventional choice to say the least. After the truly horrific spectacle that was Daredevil we all hoped that Affleck would stay away from the superheroes. Apparently not.

So let’s see why Affleck has possibly ruined his returned status as a Hollywood A-Lister (we all know he seriously sucked for a long time after the Daredevil fiasco). Well according to the Hollywood Reporter Affleck can be reassured by the fact that Batman isn’t his baby, he will be starring alongside Henry Cavill who will be holding the weight of the film on his shoulders. Now as much as this may be the truth, let’s just face reality for a moment people: now that Affleck’s been chosen as Batman (followed by the thunderstorm of media and social network coverage) we know that when the reviews appear and the film is open to the critical public eye that we will be seeing some up close analysis of good old Benjie’s performance. Most of us will have seen Christopher Nolan’s Batman Trilogy, now those are absolutely awe inspiring films – especially The Dark Knight. When you hold up such beacons of excellent film making by Nolan, and acting from the likes of Christian Bale, it really leaves poor Affleck with no chance to be a better Batman. The best he can hope for really is to be a better Batman than George Clooney was. If that doesn’t tell us something then I’m really not sure what will.

This is all obviously just my own opinion, for all I know Affleck can turn out to be the best Batman that ever walked this Earth – but somehow I really doubt it. Considering the reaction on my Facebook and Twitter newsfeeds (as well as the general media) I’m pretty sure most people agree with me, Affleck might be a great actor, director, screenwriter and producer – but he sure isn’t a superhero.

Let me just reiterate, I have nothing against Ben Affleck – apart from the fact that I think he would make a terrible substitute for Bale’s Batman. Now, to leave you with something mildly hilarious… Enjoy. 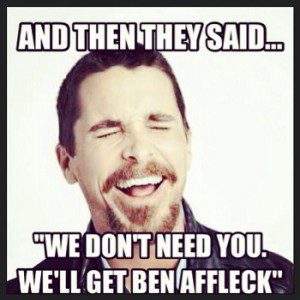 Don’t forget to Guess the Movie:

“Because some men aren’t looking for anything logical, like money. They can’t be bought, bullied, reasoned, or negotiated with. Some men just want to watch the world burn.”