Posted on November 7, 2014 in Books, Film, Hodderscoop with tags The Forever Watch

All November we’ll be using Hodderscoop to round up the week’s NaNoDodo posts, as well as any questions that arose during the week’s Hodder Editor session.

And today on Ask a #HodderEditor:

A: We make every effort to respond to agented submissions within 21 working days of receipt.

Q: response time same for submissions from US?

A: I can’t speak to that, I’m afraid… but probably not too far off!

A: If the characters are Americans, use American terms and UK spellings. And try to find an American betareader!

Q: even if you are hoping some mainstream crossover audience?

Q: Hi if short story already published, can I still include it in collection of new short stories and do I need agent to submit?

A: Yes; say that one is prev’y pub’d. We always suggest finding an agent to submit – start with the @Writers_Artists Yearbook.

Q: what’s it like constantly dragging that sled around The North?!

Ask a #HodderEditor runs every Friday from 11-12 – just use the hashtag and a Hodder Editor will answer!

And here’s what (else) we got up to on the blog this week!

We celebrated DiNovember by introducing you to a sampling of the best dinosaur webcomics out there, and then listed our favourite dinosaur films! We also tweeted that photo of Jeff Goldblum from Jurassic Park for the third time.

We reviewed the pilot episode of Gotham, the ‘young Bruce Wayne, young Commissioner Gordon (before he was commissioner, obviously) and lots of young villains’ show that started this season. We’re cautiously optimistic!

You figured out this week’s UnCovered pretty quickly…

Finally, we revealed the cover for David Ramirez’s follow-up to The Forever Watch: isn’t this glorious? It’s called The Black Disc and it publishes next year! And it’s going to be amazing. 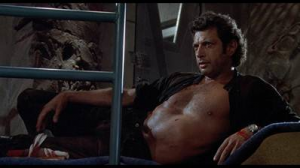