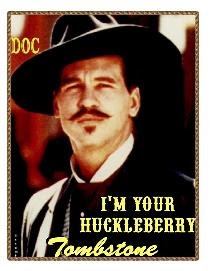 King Richard III’s post-mortem is in, and it looks like he died a quick and brutal death. (Also, after he was dead, someone just went up and stabbed him in the butt.)

Here’s a little history (and alcohol) to ease you into the weekend: six historic events where everyone was actually super drunk.
The AV Club deconstructs one superb scene in the classic movie Unforgiven. Though I’m also a big fan of the slightly less classic western Tombstone:

Billy Clanton: Why, it’s the drunk piano player. You’re so drunk, you can’t hit nothin’. In fact, you’re probably seeing double.
Doc Holliday: [takes out a second gun] I have two guns, one for each of ya.

542 people dressed up as Batman, because why not? (Or in order to set a world record. One of those things. Maybe a little of both.

And here’s what happend on the blog this week!

Oliver wrote a masterpiece comparing Dante to our own Tad Williams. That’s good company to keep!

Any ideas what classic (well, future classic) we recreated for this week’s UnCovered?

We had a brilliant special guest post from none other than Lauren Oliver to introduce her new novel, Rooms.

Contributor Ian Simpson wrote a compelling argument in favour of judging books… by their covers. The argument got pretty intense on Twitter… what do you think?

There are a lot of films coming out this autumn, and these are the ones we’re most looking forward to.

Finally, we discussed our favourite crime novels (and series) for today’s Friday Favourites.