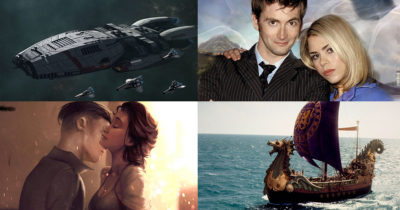 When it was proposed that we should do a Valentine’s Day blog post about our favourite ‘ships’, the Hodderscape crew were a little confused about what kind of ships to write about, so we decided to do both!

Scroll down below to see which SFF relationships made the top of our list  (think Buffy and Spike, Princess Leia and Han Solo) to our favourite ships as in as in magical, intergalactic, and just plain cool vessels. Ooo the choices. . ..

Did we include your favourites?  Comment below and tell us which ‘ships’ you’d choose.

Favourite Relationship: Eliot and Margo in the Magicians (TV series)

Because you didn’t technically specify that I had to choose a traditional romantic relationship… and because these two completely stole the show in Every. Single. Way. Possible. I specified the TV show versions rather than the book versions (I know! Gasp!), because they’re very different characters in these different mediums, and oh my god are the TV versions fantastic. Their relationship may defy standard definitions of sex, romance, or friendship, but it 100% gets to the heart of what is actually important: always being there to support the other person. And if they do that frequently with cocktails? Well let’s just say it doesn’t make me like them any less… 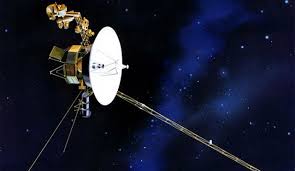 Okay, so apparently I have difficulty following the rules. I guess this isn’t technically a ship, so I should really be disqualified, but when I was trying to think of my favourite ship, I struggled because it’s so hard to separate the ship from the crew. To solve this problem I went with a completely unmanned space craft instead! Voila! And either way, the Voyager 1 is totally cool. It’s currently the man-made object furthest away from earth and contains a ‘golden record’ full of information that potential alien lifeforms might be able to understand and learn about humanity from.

Favourite Relationship: Kaz and Inej from the Six of Crows duology: 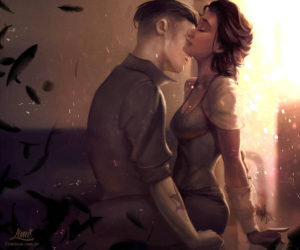 Oh, these two break my heart, but in a good way. While not officially a couple at the end of Crooked Kingdom, they seem to be taking steps (as two people with PTSD and severe trauma in their pasts) to develop a relationship where they both feel safe, respected, and free to pursue their ambitions – respectively, a crime empire with a heart and prowling the seas to fight human trafficking. GOALS. Kaz and Inej have so many wonderful moments throughout the duology, and their final scene is one of the sweetest I’ve ever read, but I also just love their friendship and dynamic within the Dregs. Highly commended ships: Wylan and Jesper and Genya and David from the original Grisha trilogy. 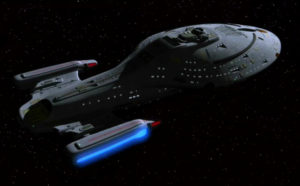 The Starship Voyager may not be as big or sexy as the Enterprise-D, and Star Trek: Voyager has its detractors (who are all wrong, but whatever), but I never get tired of seeing it glide majestically overhead in that beautiful opening sequence. Two holodecks and a food replicator are surely all we need in life to be happy. And, it being noted that it’s hard to separate a ship from its crew, I love this tough, resourceful crew TO DEATH. It’s got the badass lady Captain Janeway played by the equally badass Kate Mulgrew, the adorable Kes and Neelix (rest in peace that ship), a sentient hologram doctor, a foxy af former Borg… honestly, just so many foxy people. Ayala in his Maquis fatigues, anyone? It’s also got that tragic lost in space backstory and a purpose we can all relate to: to go home. 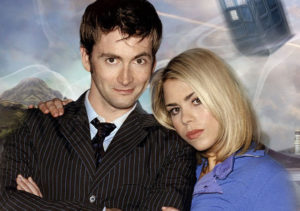 Move over, River Song. It’s always been, and always will be, Rose Tyler and the Doctor for me – and not just because David Tennant is my favourite of all the Doctors, and I had a huge crush on Billie Piper at the time… Like most good things you never really know what you have until you lose it, and that ‘Doomsday’ episode, well, my heart still aches thinking about it to this day. The stark white wall, the anguished tears, the words left unsaid, reverberating in silence throughout the span of all time… *stares wistfully into the middle-distance* 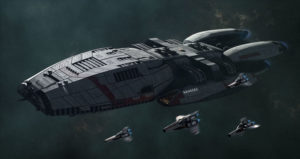 OK, let’s be honest: the Battlestar Galactica is a pile of junk. It’s ugly, cumbersome, bulky. A literal museum artefact, decommissioned just before all went belly up and it became humanity’s last chance of survival against the Cylons. But what I love about this ship is how much of a reminder it is of all we can achieve and become together when we’re pushed up against it – whatever that it might be. It’s also the ultimate symbol of the driving power of hope, the Galactica being as it is the primary vessel utilised in the search for the fabled and lost thirteenth colony: Earth. Chills. 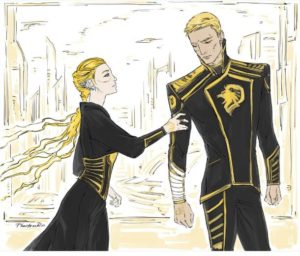 I have only recently discovered Pierce Brown’s incredible Red Rising series and I was blown away! Darrow and Mustang are both two heroic leaders from different Houses, and I think this is one of the best things about their relationship because they are set up as equals from the very beginning. Mustang is incredibly badass, she’s an awesome fighter and strategic leader, as is Darrow. Together they make a great team and are able to defy the Society against the odds. There’s a great scene where Mustang nurses Darrow back to health, which is where their romance really blossoms, and Mustang demonstrates her loyalty to him, even going as far as to defy her family. Their love is fierce, passionate but also well-balanced. My heart swells whenever I read about them and they make an awesome team.

Favourite Ship: The Heart of Gold (The Hitchhiker’s Guide to the Galaxy) 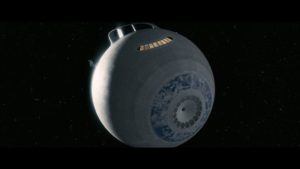 By far one of my favourite spaceships has to be The Heart of Gold from Douglas Adam’s fantastic The Hitchhiker’s Guide to the Galaxy. Firstly it is powered by the incredible mind-boggling Infinite Improbability Drive, enabling passengers to go anywhere in the universe instantaneously, whilst experiencing a range of highly improbable things, from picking up hitchhikers to causing a sperm whale and a bowl of petunias to appear and fall through space! One bizarre downside could be that The Heart of Gold’s computer gets jammed with a simple request to make a cup of tea with the final result being something “almost, but not quite, entirely unlike tea”. Luckily for me, I prefer coffee so I’d be fine! 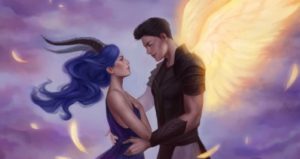 This romance completely captured my imagination. There is a huge reveal that I found so heartbreaking/heartwarming in the trilogy (I am being purposefully vague because I don’t want to give it away to people who haven’t read the trilogy yet!) – but everyone who has will know what I mean!

Favourite Ship: The Dawn Treader from the Chronicles of Narnia 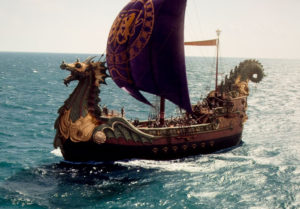 As a child I absolutely loved The Chronicles of Narnia – I wished that I was a Pevensie child (who didn’t!) and I always loved The Voyage of the Dawn Treader as the Dawn Treader sounded so beautiful and the adventures in that book particularly were many and varied. Plus Reepicheep is so cool (a valiant swashbuckling mouse!)