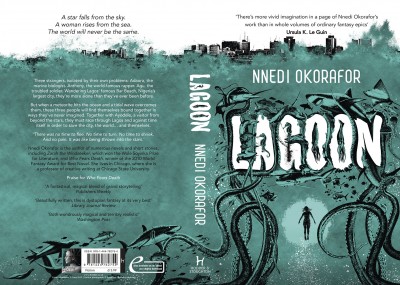 Posted on December 4, 2013 in Hodderscape Advent with tags Nnedi Okorafor

Last week Nnedi Okorafor debuted the full jacket design of her forthcoming novel Lagoon, publishing next April. Today we’re delighted to share the cover with you, just in case you missed it, and a few words from Nnedi and from the artist, Joey Hi-Fi. 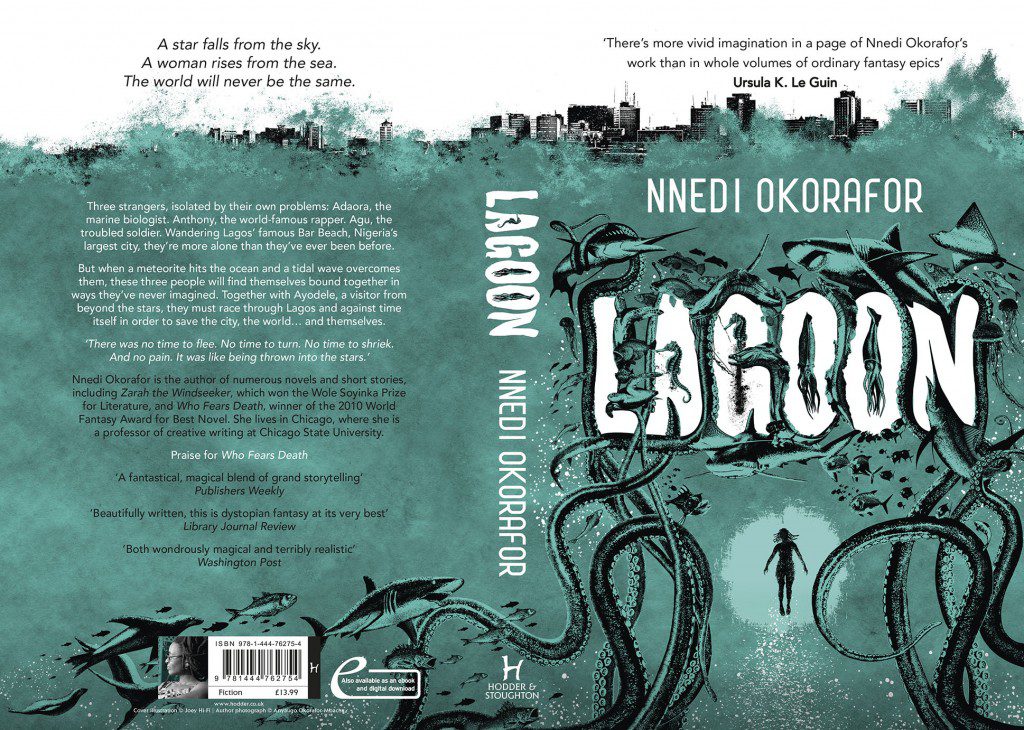 Nnedi writes: I stressed so much about how the cover of Lagoon could possibly look. A book cover can make a book a work of art (There are certain books whose covers are so lovely that I’ll buy the physical copy instead of the ebook just for that reason). A book cover is the book’s first impression. Not only can it cause a reader to pick or pass up a book, it can deeply influence the way a reader imagines the story… When I finally saw the cover for Lagoon, I squealed with delight. The award-winning South African illustrator Joey Hi-Fi captured the novel’s essence perfectly.

Joey Hi-Fi writes: After reading Lagoon I was very excited by the possibilities for the cover. I loved the book – and being a fan of all creatures and things aquatic, the opportunity to illustrate my favourite denizens of the deep had at last presented itself! When life gives you lagoons you draw tentacles. Or something like that.

The initial inspiration for the cover of Lagoon came from a particular scene in the book. It’s part of the greater mystery within the novel, so I won’t get into specifics, but it involves a unique gathering of the various sea creatures off the coast of Lagos. Sharks, swordfish, eels, stingrays,  jellyfish, seals, sea turtles… and even giant tentacled monsters of the deep… to name a few.

Tied into that event are mysterious humanoid shapes rising to the surface, large crashing tidal waves and Lagos city itself.

Lagoon is a great title to work with typographically. So I decided to combine the title with an illustration of this scene from the novel. My idea was that the negative space between the tentacles and the writhing morass of sea creatures would form the title of the novel: ‘Lagoon’.

Given the detailed nature of the cover illustration I used a limited colour palette to ensure the fine detail wouldn’t detract from the novel’s title.

I wanted the word ‘Lagoon’ to be as bold and impactful as possible.

Lagoon ensnares readers in its tentacles and takes them on a fascinating journey into its mysterious watery depths.

I’m hoping my cover does the same.