Posted on June 20, 2014 in Friday Favourites with tags The Hunger Games

So the odds may not have been in England’s favour last night, but we still love a good game, especially one that’s not constrained by technology or morality. So, without further ado, we’re selecting our favourite fictional games! 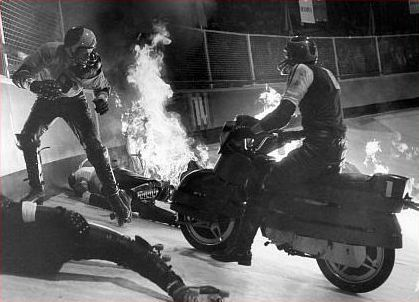 I don’t know about my fellow workers in the Hatchery, but I was never very fond of organised sport. And, of course, in our Annual Hodderscape Games, the egg and spoon race is banned. A friend of mine once told me a story that  I hope he made up. Wandering over a rugby field after a game he found a human ear lying in the mud. Imagining that the injured party and surgeons would be frantically  searching for it he rushed into the changing rooms, shouting out: ‘Who lost an ear?’  As one, thirty pair of hands flew up to the sides of heads…

In 1975 the sportophobes amongst welcomed that wonderful send up of big franchise games, the dystopic Rollerball. The sport itself is a kind of hybrid of ice hockey, American football and motorsport where the ostensible object  (banally, to stuff a metal ball down a hole) is overshadowed by the opposing teams (quite successful)  attempts  to smash, eviscerate and burn their opponents with spiked gloves, lethal spinning blades attached to motorbike wheels, liberal dowsings of petrol  and other equally  inventive dirty tricks. How well  the movie captured the feeling of impending martyrdom shared by me and my friends (and no doubt also the contestants in the Roman Coliseum) as we pulled on our rugby shirts before a game…

Real Steel is one of those strange, increasingly rare genre films that isn’t a sequel, a tie-in, an adaptation, a spin-off, or in any way anything other than what it is: a movie about a man and his estranged son, reconnecting via the time-honoured medium of playing catch operating giant robots via remote control to beat up other giant robots for money. It takes place in a slightly technologically-advanced but otherwise unchanged near-future; there’s a feisty, half-baked love interest, a son who mistrusts his father, a father who doesn’t know how to connect with his son, some road-tripping, and a lot of big robots punching each other in the robot-face. It’s sort of a combination of Pacific Rim (with less at stake) and Transformers (only, you know, likeable). And it stars Wolverine.

I can’t say that much about the actual sport in Real Steel, as it’s pretty much… boxing. But with robots. Left cross! Uppercut! Right hook! Smash! Crash! Bash! Ding! But the film’s fun and, I mean really. Robot boxing with a side of familial bonding! What’s not to love? 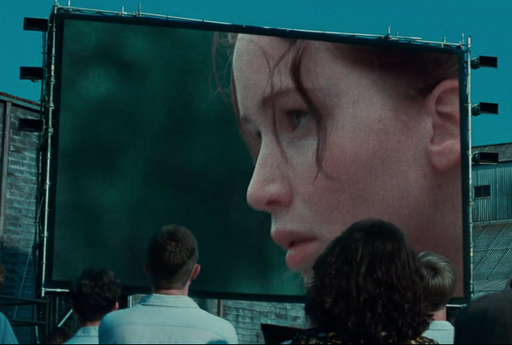 In 2002, I got briefly obsessed with Big Brother – in my defence, I was 17 and bored. The next summer, I started watching it again and quickly found myself totally sickened by it, and have very deliberately never watched it or anything like it since.

My favourite kind of dystopia is that which is rooted in reality but just moves it on a step. That’s why The Hunger Games is so brilliant. Yes, it’s got a great heroine, a love story, mortal peril, etc, but at its centre is a game that feels disturbingly familiar: the whole country watches in fascination as twelve young people are placed in a situation designed to push them to their emotional and physical limits, forcing them into extreme conflict in order to survive.

Ok, it’s a crude comparison and a massive over-simplification (this is, after all, a Friday Favourite rather than an essay!) but that, in a very small nutshell, is why The Hunger Games gets my vote this week. 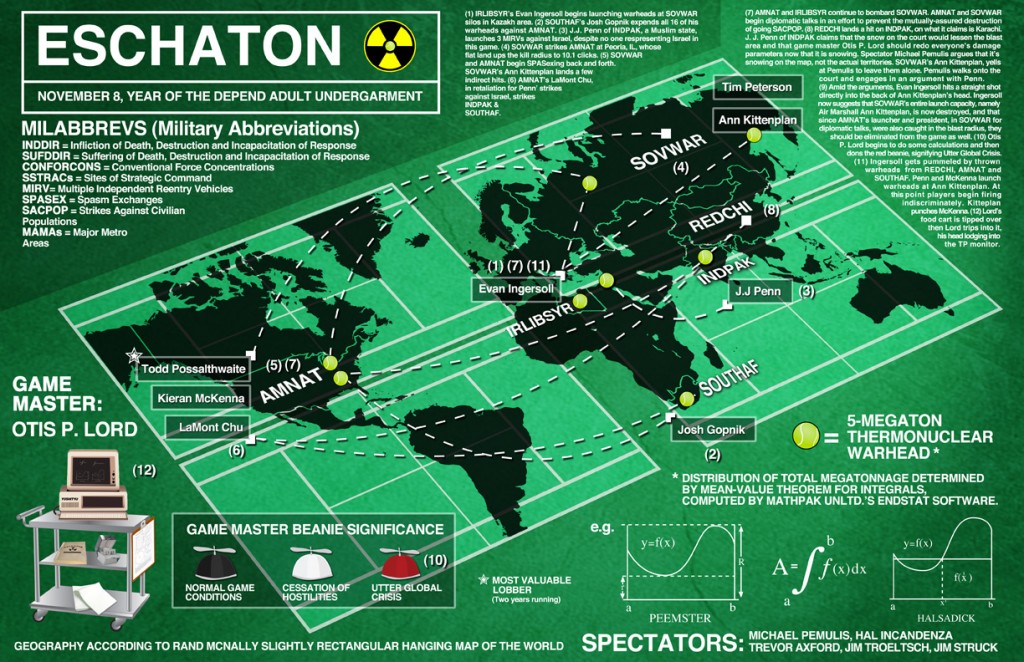 Eschaton is a computer-aided, nuclear war game played by the tennis prodigies at the Enfield Tennis Academy in David Foster Wallace’s mind-boggling Infinite Jest. In its simplest form, Eschaton requires students to hit tennis balls (each representing a 5 megaton thermonuclear warhead) at various points on a map.Think Dr Strangelove, but with tennis balls and also game theory.

Like all good games, Eschaton has its own lexicon. For example: “poor old SOVWAR is absorbing such serious collateral SUFFDIR that it’s being inexorably impelled by game-theoretic logic to a position where it’s going to pretty much have no choice but to go SACPOP against AMNAT”. You can almost get the jist of it, but the acronyms show the intricacy of the game the meticulous rule-makers have created.

Suffice to say, it’s hard to understand Eschaton let alone play it, and I don’t think we’re going to see an Eschaton World Cup any time soon. Eschaton could just be a rather obvious metaphor for real life nuclear warfare and its attendant acronyms, but the detail Wallace puts into the game also mean it’s about fanaticism and the crazy abstruse worlds teenagers create.