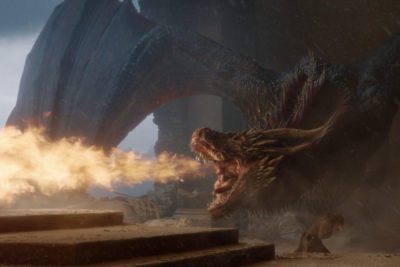 Posted on May 21, 2019 in Television with tags Game of Thrones

Wow – it is finally over. The Hodderscape Team are mostly in shock after the last episode of Game of Thrones, but we have managed to gather ourselves together to write down some thoughts on the final divisive episode.

I definitely have mixed feelings about the end of GoT. It was impossible for the writers to keep everyone happy and I myself have no idea what my ‘perfect’ ending would look like. Bran as King definitely felt like a last-minute decision (‘Dany?’ ‘No.’ ‘Jon?’ ‘No.’ ‘Sansa?’ ‘We’ll give her the North.’ ‘Sam?’ ‘Ha- no.’ ‘So, I guess, Bran?’) but I liked that Jon ended up in the North and back with Ghost and enjoyed the Small Council scene at the end. Sansa and Arya’s ‘arcs’ (as I believe we’re all supposed to say now) felt the most satisfying. But Dany’s death felt really badly done and the destruction of the Iron Throne by Drogon (who now, apparently, understands metaphor) let like something that was high-fived over in the writers’ room but fell flat in reality.
-Alice

‘Okay. Fine.’ – is what my reaction to the final episode was as the closing credits began to roll. In a season which, for me, only really managed to produce one exceptional episode (‘The Long Night’) my expectations had been lowered to a point where what I once would’ve considered to be a decidedly sub-par conclusion to a brilliant TV series, I’ve come to accept as probably being the finale it deserved. Harking back to all the compressed plot-lines of season 6 and onwards (remember that irrefutably laughable ‘take-a-zombie-to-King’s-Landing’ plot device?) I was unsurprised and unperturbed – for the most part – at how ham-fisted and contrived it all ended up being. After all, look at all the great things we got to see: Dany is defeated! No more Iron Throne! Tyrion and Jon don’t die! Sansa becomes Queen in the North (hooray!)… Arya goes west (hmm… OK). Bran the Broken, formerly known as The Three-Eyed Raven, formerly known as Bran, becomes King of the Six Kingdoms…? OK, I was a little perplexed at that one. But on the whole, let’s say for what I had come to expect, I was satisfied. It was as good a final episode as we were ever going to get in the end.
– Cameron

If you want my final GoT review it is ‘Yay, Jon petted Ghost, what a good dog.’
– Ruth

I realised when I worried that Jaime’s golden hand might twitch back through the rubble in the opening moments that this series had pushed me too far. I made the stabbing noise for Jon killing Dany a good 2 minutes before it happened. I laughed out loud when the random council of lords and ladies started discussing elections. I remain so, so angry that Bron made a joke about funding brothels and Bran left to warg into Drogon in the closing council scene. This is not what I came for. I have struggled to come up with ways they could have made this worse.

I liked the costumes, particularly Sansa’s final outfit. Also the CGI, particularly Dany channelling the Kremlin/Nazis and Drogon waking up under the snow. Kudos to those technical teams. They almost made the fact that the majority of the episode was panning shots of characters catwalking around worthwhile. I think the actors really tried with an abominable script, with Peter Dinklage taking on 90% of the dialogue solo as well as he possibly could.

Wow! I am so sad it’s the final episode but boy what a ride. I do agree with some of the criticism I’ve seen about the final few episodes but I also wonder how you can end such as epic adventure that is Game of Thrones? You could never please everyone and I’m not even sure I knew how I wanted it to end? I do think everything seemed nicely and quietly resolved by the end. I loved the touching moment with Brienne writing about Jamie’s legacy, and I’m pleased Jon has returned to the Night Watch to be with Ghost and the Wildlings – it’s where he belongs. I wouldn’t say I loved this season as much as the rest of the series but I hope George R. R. Martin finishes the books as maybe the story won’t feel so rushed as a novel – please George write! Also I am a little lost as to what to read/watch now. Any suggestions?
– Maddy