Game of Thrones: ‘The Bells’ Review 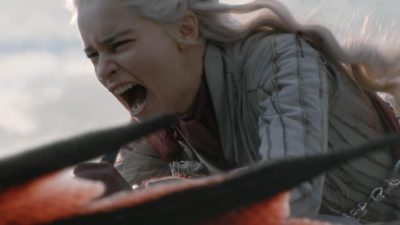 SPOILERS AHEAD FOR GAME OF THRONES: THE BELLS!!!

The Game of Thrones fans in the office have managed to stop arguing long enough to write down some thoughts on this week’s divisive episode.

Well, that was tough. And I don’t doubt that it’s credible that Dany could have got there, and it’s not as if this show hasn’t tortured us before (waves at Shireen at her stake), but….REALLY???!! I just don’t think I really believed in the moment when Dany flipped and thus found it hard to tolerate the protracted, methodical nature of her destruction of all life in King’s Landing. Jon Snow’s bewildered face hardly covers it. And much as I love a moonlit cliffside execution by dragon, I thought that Varys’ storyline didn’t do him credit either. This man has survived so many reigns of Westeros – how was he so bad at plotting and so easy to catch? All in all, a disappointing episode that paid off too many characters’ stories too cheaply (WTF Jaime?) and has set up a rather obvious ending. Boo.

Controversial opinion alert! I have never been Team Dany, and I am not massively surprised or distressed by her Flame On! moment. Yes, she has always previously used her armies and dragons against people in power, but I think her messianic streak and her ‘my-way-or-no-way’ approach always had the potential to make her as bad as the rulers she was aiming to replace. (Also, has she checked in on Mereen lately? That city could be overrun by slavers again for all it seems to interest her now.) I do feel like the more interesting story of how a character who’s heroic (when they are hurting people we hate) becomes a baddie (when they’re just intent on victory at all costs) has been rushed. There’s a more interesting take on her isolation, and fear, and determination that only exists in my head: we haven’t properly seen that on screen. And I’m definitely not pro the lazy ‘she’s a Targaryen/Jon wouldn’t sleep with her’ justifications given. But fundamentally I believe GAME OF THRONES is a cynical show about war and rulers, and I am much happier with this version of the story than a ‘yay Dany is Queen now, fairytale ending!’ take. Having said all that, I am pissed off that Jaime didn’t go back to King’s Landing to kill Cersei rather than try to save her. That would have been a better endpoint to his redemption, right?

I am equal parts vindicated for my dislike of Daenerys, and deeply disappointed that she actually Went There. I could see it coming but still hoped she would do right at the last minute and remember who she wanted (or claimed she wanted) to be all this time. It was absolutely gut-wrenching watching Drogon destroy King’s Landing, and particularly awful to see Daenerys’ troops butchering innocent civilians in the streets. I am so, so disappointed in Grey Worm! Elsewhere, I loved Arya and Sandor’s goodbye (ESPECIALLY when she called him Sandor!) and Jaime and Tyrion’s last moment together. While I think Jaime is an utter fool for abandoning Brienne in favour of dying with his evil twincest sister, it really was very sweet seeing the brothers share some love. Tyrion is my MVP right now and I can only hope that he survives long enough to kill Daenerys and put someone better (*cough* Sansa *cough*) on the throne, as an apology for backing a tyrant and doing his good pal Varys so dirty.

I am so mad. Like so, so mad. I’m not mad at what actually happened, but I am mad about how it happened. Even leaving the rest of the season how it is, I think they could’ve done a far better job of showing Dany turn into the Mad Queen (emphasis on showing not telling). Really guys, she burns the city because Jon refused to have pity sex with her (…his aunt) and because she has a genetic disposition to being crazy? I don’t buy it. The timing was totally off too – if she had decided to raze the city at any time other than the one moment where she has a chance to show mercy I could have understood because it was the only thing she thought could work. But as the Bells start ringing and the city surrenders? No. Perhaps it’s because I’ve always been team Dany, and wanted her on the iron throne, but I honestly think that’s not the case – they could’ve done this so, so well, but they didn’t, and they’ve done the character a massive disservice.

But I didn’t hate it all! The battle was epic, and truly terrifying (although c’mon – you can’t set up those Scorpions to be completely deadly and then not have a single one hit). The scenes of Arya running through the streets of King’s Landing were spectacularly shot, and I’m even more in awe of Maisy Williams (she can go from young and innocent to badass survive at the top of a hat, and make both convincing). I was also onboard with Cersei finally getting a chance to be more than a cartoon villain, and I thought the scenes where she’s finally realises she’s been defeated, and is no longer in control were epic (even if I was a tad disappointed that she wasn’t assassinated by either Jamie, or Arya wearing Jamie’s face.

I have very mixed feelings. As much as I enjoy not having to deal with the smug condescension of GoT fans who get around to reading the books before I do, It’s been clear for a while that D+D have been suffering from a lack of source material to adapt for the series. Watching King’s Landing burn to the ground was a devastating and visceral viewing experience, which I enjoyed – for want of a better word. No TV series has ever done spectacle as well as GoT. But where was the satisfying build-up to Dany’s transformation, where was the intrigue and exposition needed to make the theatre of the situation that much more impactful and harrowing?

We have one final episode left in the entire series now, just 80 minutes left. But it feels like we still have enough politics and character arcs to last us another season at least. I’m worried we’re not going to be left with a satisfying conclusion. I really do hope that they can pull it out of the bag and deliver something special for the finale.

Wow! Another epic battle, which proved that you only need one dragon to obliterate the Iron Fleet and take King’s Landing by storm. But I’m so saddened by the transformation of Dany to a villain. I’ve been a big supporter of hers, even when she’d had to make tough decisions (like killing Varys) but I always thought she would do the right thing in the end. Well I was wrong, I felt as gobsmacked as Jon Snow. And when Grey Worm continued the fighting and gives Jon a withering look of ‘You’re either with us or against us,’ I felt so crushed. Jon’s loyalty is going to be really tested now. I was sad Cersei didn’t have more of a gruesome or shocking death, she’s been the main villain throughout and it seemed a bit sad that she would meet her end in the arms of Jamie and in the rubble. I loved the filming on the street with Arya, you really felt all the terror of the people. I was so nervous that Arya, who has saved the human race from the White Walkers, was now going to be killed by a falling building. Not cool! But phew, she’s survived! And now she’s found a horse, is it her destiny to go and kill Dany? I don’t know how this is all going to end but I am certainly going to be super sad when it’s over.