Yesterday was Thanksgiving, so in honour of our transatlantic neighbours we’ve picked out our favourite books about America for this week’s Friday Favourites. 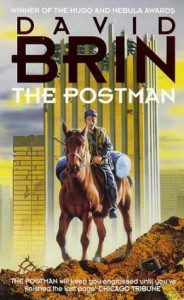 A cockle-warming, post-apocalyptic tale of a reluctant hero turned hero and the power of symbols in destroying forces of darkness.

Civilization in the USA has been destroyed — not by the nuclear weapons or bio-plagues that ravaged its lands but the violent army of hyper-survivalists, the Holnists, who are damned sure no vestige of Federal Law is going to be reinflicted on them, and have thus prevented recovery.

Gordon Krantz is a feckless drifter, riffing Shakespeare for tips. He travels West, to Oregon, and one day takes refuge in an abandoned United States Postal Services van. He steals the uniform he finds as he has no other clothes and a bag of mail he hopes to barter for food.  But the uniform and his made up story, that he represents ‘a ‘Restored United States of America’, undergo a strange alchemy when he meets other survivors in the Willamette Valley. Here his tale goes from a fabrication to a reality. People want to believe in the symbol he represents, rally round his ’cause’ and actually set up a postal service so they can send messages of hope to other survivor communities. Krantz’s new friends,  descendants of scientists, ranchers, loggers and Native Americans, rise up and fight the Holnists. Hope in civilisation is restored. 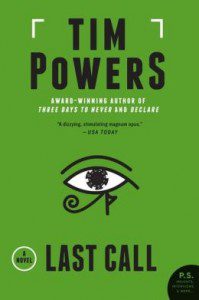 There’s a power to the idea of the American west, familiar to so many from innumerable films and tv shows – images of cowboys and cattle, dusty plains and busted mines, shattered hopes and Hollywood dreams. And nowhere is that power more beautifully, magically expressed than in Tim Powers’ masterful 1992 novel Last Call. Last Call tells the story of the founding of Las Vegas by way of a reworking of the legend of the Fisher King, with some love, some loss, some death and some redemption heaped on for good measure. Oh, and a brilliantly realized magic system that’s equal parts Newtonian physics and hokey old superstition. Powers writes with energy and poetry, but the novel’s true greatness comes from the fact that it’s set in what is, absolutely, our world. It’s so realistic, so close to true, that the experience of reading the novel feels like a confirmation of things we already sort of knew, something half-guessed or partially remembered. It’s an American west we know because it’s the American west in our minds – dark and dry and dirty and wholly transformative. 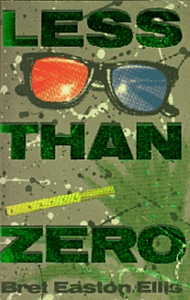 If we’re talking iconic American authors, then Bret Easton Ellis has to get a mention. I could talk about any of his books here, but I’ll focus on Less Than Zero, his first novel (published when he was only 21) and the first work of his that I read. Disturbing, shocking, and perhaps even more relevant now than on its initial release, Less Than Zero is a terrifying portrayal of a culture of excess, and the depths to which humans will sink in pursuit of pleasure. It scared the bejeezus out of me. In a good way. 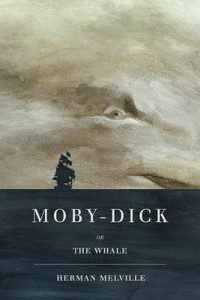 So this isn’t strictly SFF, but if we can’t stake a claim on a mythic tale about the epic pursuit of a diabolical whale then we’re not trying hard enough.

On the one hand, Moby-Dick is a book routed in Old World traditions; it’s a classic drama of nemesis and hubris centered around the interminable Moby-Dick, a Frankenstinian monster assembled out of a mythic patchwork. But, it’s also a uniquely American legend. These old myths are served up with irreverence and humour by the narrator and the sailors aboard the Pequod. The ship is a melting pot of various idiosyncratic American characters (caveat: they are all men, but the bromances are wondrous).

The book itself is a somewhat bonkers hotch-potch assemblage of obscure facts about whales (ever wanted to learn the various measurements of a whale skeleton? Skip ahead to Chapter 103!) combined with occult whale worship. Also, I would sacrifice my soul to Moby Dick to write like Melville:

The Virgin Suicides (1993) by Jeffrey Eugenides 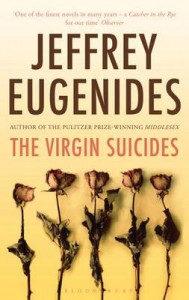 What I loved in particular about this book was how it turned the very core of American culture, religion and the American dream, on its head. The extraordinary tale of the Lisbon girls shows how they were marginalised by their cultural surroundings, the girls consistently drive to achieve their simple version of the American dream: happiness. They are consistently thwarted by their mother’s obsessive religious views and the watchful eye of the suburban community they live in, the opposing forces of striving for happiness and never achieving it eventually mean the girls reach an irreconcilable point where their lives are simply at a stalemate.

Before I finish this I feel I have to mention one point in the book, the image is constantly in my mind whenever I think about the story. When young Cecilia impaled herself on the fence (the steel fence is an inversion of the white wooden picket fence) near her house. This is a powerful bit of imagery, a literal translation of the consequences of living in a world with false promises. Disturbing, but sadly beautiful. So I say if you haven’t already, I’d definitely recommend giving it a read.